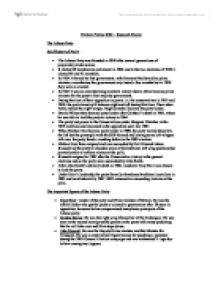 Political Parties 2002 ~ Research Project The Labour Party Brief history of Party: * The Labour Party was founded in 1900 after several generations of preparatory trade unions. * It elected 29 members to parliament in 1906 and in the two elections of 1910 it elected 40 and 42 members. * In 1924 it formed its first government, with Ramsay MacDonald as prime minister, nevertheless the government only lasted a few months but in 1929 they were re-elected. * In 1945 it won an overwhelming electoral victory where Attlee became prime minister for the party's first majority government. * During the time of their opposition in power i.e. the conservatives in 1955 and 1959, the part almost split between right and left during this time. Then when Attlee retired the right-winger, Hugh Gaitskell became the party leader. * Harold Wilson then became party leader after Gaitskell's death in 1963, where he was able to lead the party to victory in 1964. * The party lost power to the Conservatives under Margaret Thatcher in the 1979 elections and remained in the opposition until late 1997. * When Michael Foot became party leader in 1980, the party moved sharply to the left but the party split with the SDP formed and leaving some left-wingers left over, the party faced a crushing defeat in the 1983 election. * Michael Foot then resigned and was succeeded by Neil Kinnock where Kinnock led the party to abandon some of its traditional left wing positions but proved unable to achieve victory at the polls. * Kinnock resigned in 1992 after the Conservative victory in the general elections and so the party were succeeded by John Smith. * After John Smith's untimely death in 1994, moderate Tony Blair was chosen to lead the party. * Under Blair's leadership the party formally abandoned traditional socialism in 1995 and won historically 1997-2001 consecutive resounding victories at the polls. ...read more.

* Heath survived the Party's loss of further seats to Labour in the 1966 election, but never secured the affection of the public or Conservative backbenchers. To general surprise, he won the 1970 election and became Prime Minister. * Despite his personal achievement in taking Britain into the Common market, the failures of the Heath ministry of 1970-1974 have been the catharsis of modern Conservatism. * The reversals of policy, the failure to control inflation or contain the trade unions through legislation on industrial relations, and two defeats at the hands of the coal-miners led first to the fall of Heath and second to the rise and development of Thatcherism. * After losing the two elections of February and October 1974, Heath was forced to hold a ballot for the Party leadership in February 1975 in which he was defeated by Margaret Thatcher. * In opposition during 1975-1979 the new leader developed a radical agenda founded upon the 'free market', rolling back government intervention and leaving as much as possible to individual initiative; this was the core of thatcherism. * Concern over economic decline and the power wielded by the trade unions created a receptive public mood, and Thatcher led the Conservatives to three successive victories in 1979, 1983 and 1987. * She was the dominant political personality throughout the 1980s, especially after securing victory in the Falklands war of 1982. * She is widely credited with restoring Britain's status as an enterprise-based economy and as a significant influence on the international stage. However, at the end of the decade economic recession, her commitment to the deeply unpopular 'poll tax', and internal disputes over European policy led to Mrs Thatcher's defeat in a leadership ballot in November 1990. The main ideology of the party and the most important factions: There was the ideology of Conservatism, which is more of an approach than just a set of ideas. ...read more.

The best way to summarize the Socialist Alliance is to say that they represent the same ideals as Clement Atlee's 1945-1951 Labour Government. They are a new party, founded in 1996 but with a great deal of support including a relatively large membership for their size of over 5,000 and the backing of influential trade unionists, journalists and comedians. They are naturally a coalition of a variety of parties, organisations and individuals whom are all to the left of the Labour Party. These include the Marxist, Socialist Workers Party, and the Communist Party of Great Britain as well as many former members of the Labour Party. Analysis of why it has failed to challenge the dominance of the two main parties: This party has failed to challenge the dominance of the two main parties because this party is a minority party and it lacks in many things such as it doesn't have such a high financial status as the two main parties, it doesn't have as many voters behind them since they are a very recent and newly built party. This party has done pretty well for a start, and it does have the values and beliefs of the three main parties one party. The only thing is that the two main parties have been in the business or in the category for many years or even decades and they have a successful history therefore they have attracted many people from the past and people tend to stick to their old favourite rather than changing to a new one which probably has a bright future as this party surely does. Also since they do not have many supporters and may not have supporters from big businesses their funding will be very low and they wouldn't receive any large donations unless they prove they are serious candidates in challenging the two main parties. Also the key policies and promises, which they have made would not necessarily be believed by the public that they will be achieved since they have no history behind them stating they have fulfilled the promises they had made before. ...read more.