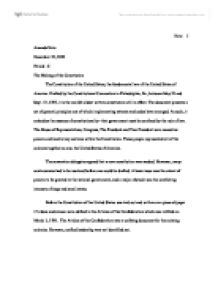 The Making of the Constitution.

Amanda Note December 23, 2003 Period : C The Making of the Constitution The Constitution of the United States, the fundamental law of the United States of America. Drafted by the Constitutional Convention in Philadelphia, Pa., between May 25 and Sept. 17, 1787, it is the world's oldest written constitution still in effect. The document presents a set of general principles out of which implementing statutes and codes have emerged. As such, it embodies the essence of constitutionality--that government must be confined by the rule of law. The House of Representatives, Congress, The President and Vice President were executive powers outlined in key sections within the Constitution. These people represented all of the colonies together as one, the United States of America. The convention delegates agreed that a new constitution was needed. However, many controversies had to be resolved before one could be drafted. A basic issue was the extent of powers to be granted to the national government, and a major obstacle was the conflicting interests of large and small states. Before the Constitution of the United States was laid out and written on a piece of paper it's ideas and values were edified in the Articles of the Confederation which was ratified on March 1, 1781. The Articles of the Confederation was a unifying document for the existing colonies. ...read more.

On June 18, 1787, Alexander Hamilton gave a six hour oration calling for a strong central government. Under his plan, the chief and senators would be elected for life. How wrong this was to do so, this would be to close to it becoming a monarchy, having one person rule for life. On June 19, 1787, James Madison delivered a precise evaluation of the New Jersey Plan. The New Jersey Plan was then ultimately rejected. On June 27, 1787 Luther Martin of Maryland revives the small states' campaign to achieve equality of votes. He argues that if states "surrender the right... their liberties are lost." Martin's speech leads to days of impassioned - and deadlocked debate. On July 10, 1787 with debate on the Constitution at an impasse, George Washington writes: "I almost despair of seeing a favorable issue to the proceedings of the Convention, and do therefore repent having any agency in the business." On July 16 , 1787 In a dramatic turn of events, and a significant victory for the small states, the convention delegates adopt the compromise measures proposed by Roger Sherman, and elderly ex-cobbler from Connecticut. Representation to in the House would be based on population size, with each state having an equal vote in the Senate. On August 16, 1787 The delegates give Congress the power to levy and collect taxes and expunge duties, regulate commerce, establish a uniform rule for naturalization, coin money and fix the standard for weights and measures. ...read more.

The nature and extent of the implied powers of Congress produced two decades of controversy. The failure to define the precise location of independence left open a door for a vigorous states' rights movement and led ultimately to the Civil War. It took the same national emergency to clarify many of the powers of the presidency, especially in crises. On the other hand, the document was remarkable in the boldness with which it sought to extend to the entire nation the heretofore limited and localized American experiment with republicanism. The framers of the Constitution envisaged the conduct of national affairs by all citizens and anticipated that such conduct would result in advancing the welfare of all citizens. This took both wideness of vision and a healthy confidence in the potential wisdom and responsibility of the electorate. It was the boldest step toward government of, by, and for all the people yet undertaken by Western man. In it first two hundred years of operation the Constitution proved remarkably flexible. The nature of the U.S. government changed greatly, but most changes evolved from new interpretations of the document. Formal amendment proved necessary in only twenty five instances, and these occurred mainly in spurts--as during the Reconstruction and Progressive periods. However, many of the twenty five amendments provided for fundamental social and procedural adjustments. i As;dlkfj ii jh iii jh I Note ...read more.