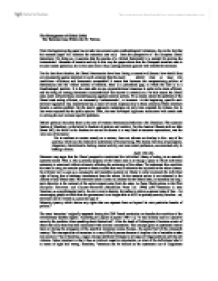 The Management of Global Crisis.

The Management of Global Crisis The Terrorism Case Within the EU Policies From the beginning the paper has to take into account some methodological limitations, due to the fact that the research paper will examine the terrorism case only from the perspective of the European liberal democracy. By doing so, it assumes that the analise of a limited framework it is enough for proving the international character of terrorist activity.In this way the paper shows that the European terrorism case is to some extent particular, but in the same time it has a strong common ground with worldwide terrorism. For the last three decades, the liberal democracies have been facing a normative dilemma: how should they act consistently against terrorism in such a manner that the result should meet at least two conditions- efficiency and democratic acceptable? It seems that between the compromising politics of democracies and the violent actions of terrorist, there is a procedural gap, in which the first is in a disadvantaged position. It is the state able to use unconstitutional measures in order to be more efficient, and by doing so loosing democratic accountability? The answer is certainly no. For this reason the liberal state avoid indiscriminate countermeasures against terrorist actions. To a certain extend the problem of the liberal state acting efficient, so necessarily 'undemocratic', is incorrect. At the beginning, specific anti-terrorist legislation was implemented (as a result of social outputs) only in those countries where terrorism became a serious problem. So the state's aggressive campaigns not only were suported by citizens, but in fact were requested by the public opinion. Than, the state developed legitimate institutions with certain task in solving the new occured specific problems. Behind political decisions there is the core of western democracies behaviour -the liberalism. The essential feature of liberalism, is the belief in freedom of opinion and conduct. For the classical liberals such as John Stuart Mill, the belief in the freedom to act and to choose in a way fitted to ...read more.

The EU policy consists in strenghten external borders of the Union. The efficiency of this policy will have to be proved viable in the near future. The European history seems to create 'specific conflict areas' where terrorist acts are most likely to occour.This cannot conclude by far that terrorist acts are predictible regional phenomena.By definition they have an unpredictible character.For example even if Balkans are considered to fit this profile , no one has predicted that the Yugoslavian desintegration will lead to terrorist acts.And further more, no one believed that the international aid for Kosovo will be used by UCKA terrorists against Macedonia The joint actions against terrorism has certainly a psychological effect on terrorist determination to act, according to the principle 'all against me'.It can also have an perverse effect which can even 'sentimental' legitimate it:'single against all'. The supossition is that terrorist will act not by emotional presuposition, but in terms of costs. The Northern Ireland Case. According to Peter Chalk (Chalk 1996:69-89),during1990 and1993 ,31 per cent of European terrorist acts occourred in Northern Ireland.(701 terrorist incidents).The conflict is carried out by paramilitary groups,in a context in which religious affilation coincides with political loyality: the Republican Catholic organizations (predominantly PIRA and INLA-Irish National Liberation Army), fighting for independence and theLoyalist/Protestant groups( UlsterVolunteer Force/UVA and Ulster Defense Assocciation/UDA)-fighting to maintain the status quo.The Protestant population represent the majority and An 1987Anglo-Irish Agreement stipulates that british soveriegnity in N.Ireland was inviolable until a majority of inhabitants will wish to change it.In September1993 an agreement was reached between Sinn Fein(the political wing of PIRA),and Social Democrat Labour Party(an anti-violence party) which was hoped to solve the problem by means of negotiation- instead 18 b**b attacks were carried out by PIRA in the province and on the mainland.The agreement was interpreted by Loyalist extremists as a common front to gain Brirish withdrawal.In 1994 the two forces admitt to proceed by means of negotiation, but such a deccission is suspected of being ordered by short-term pragmatical interests ...read more.

will use its expertise to combat terrorism, an Investigation Agency with authority on extradition process and some media regulations which will minimalize the ' advertising' impact of terrorist actions. These are just several trends which could be taken by the further evolution of the European Union Common Security Policy. The European terrorist case seems to be more particular within the framework of the worldwide terrorist theory. The convergent aspects deal with the emergence of the new 'global society', which implies: the compression of space , the mediatic campaignes and the emergence of collective identity crisis.The differences seems, at least for me, to be more important.This is the rationale of this paper.The European terrorism case seems to have a specific history, which must take into account the history of European evolution.'My theory' consideres that terrorism is a more regional process in Europe than elsewhere in the world, even if its effects could become largelly international. An explanation could be the fact that Europe has a greater cultural homogenity.Only in some areas defined as compact but religious divergent, such events are predictible to occur. However this relative assumptions are less important than the fact that nowadays terrorism has a much wider range of distruction that it has in the past. For this reason preventing terrorism is the most important.( at least in theory). In practice it is known that terrorism is defined by its unpredictible nature. The wider Globalisation is the larger are the chances of a terrorist act to unpredictible occur. That is why the means to fight against terrorism have to change themselves. And they have changed. This problem is no longer the object of national concern only, but it become the subject of common security policies. Back to the European particularism case: even if the process is more 'regional' than in general ,the means to combat it are as much extensive as possible. So, within Europe, terrorism is not neccessarly 'global' in its own nature but rather in the means to prevent it. ...read more.