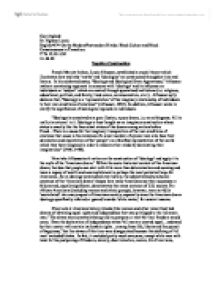 The Modern/Postmodern Divide: Black Culture and Black Consciousness in Transition.

Guy Anglade Dr. Nghana Lewis English4674-On the Modern/Postmodern Divide: Black Culture and Black Consciousness in Transition. T Th 12:10-1:30 11-18-03 Negative Construction French Marxist thinker, Louis Althusser, established a crucial theory which illuminates how and why 'myths' and 'ideologies' are constructed throughout time and history. In his celebrated essay, "Ideology and Ideological State Apparatuses," Althusser makes a convincing argument in concerns with 'ideology' and its influence on individuals or 'subject' which are created through specialized institutions (i.e. religious, educational, political, and family, trade union, communication, et al.). Althusser aptly declares that, "Ideology is a 'representation' of the imaginary relationship of individuals to their real conditions of existence" (Althusser, 1994). In addition, Althusser wants to clarify the significance of ideologies imposed on individuals: "Ideology is conceived as a pure illusion, a pure dream, i.e. as nothingness. All its reality is external to it. Ideology is thus thought as an imaginary construction whose status is exactly like the theoretical status of the dream among writers before Freud...There is a cause for the imaginary transposition of the real conditions of existence that cause is the existence of a small ...read more.

Thus the 'American dream,' to quote from Langston Hughes, has been deferred. "Deferred" because blacks had to wait, delegate to others who could promote change. Since most minorities were not fully integrated into American life, some managed to 'successfully' pass by within the rigid structure of society. Case in point, Macon Dead and rapper Shawn Carter (aka Jay-Z) should be interpreted as accultrationist rather than assimilationist with respect to the American dream for several reasons. First and foremost, the term acculturation carries three definitions: it is seen as the process of assimilating new ideas into an existing cognitive structure, all the knowledge and values shared by a society and, lastly, the adoption of the behavior patterns of the surrounding culture. Ultimately, acculturation is the obtainment of "culture" by an individual or a group of people. The latter two definitions, however, provide greater insight into Macon Dead's characteristic as an acculturationist. Living in an unjust capitalist system, resides in an era where most Americans failed to acknowledge the presence of blacks (and other minorities) ...read more.

In the contemporary context, Jay-Z is the postmodern version of what constitutes an acculturationist by virtue of the hip-hop aesthetics (whereas John Coltrane, Miles Davis or any black jazz musician can be defined as the modernist version of accultrationist). William Eric Perkins, author of 'the rap attack,' details the influence of hip-hop culture and its signification towards inner-city teens and America (in particular, African-American and Latino kids): "Rap music and hip hop culture's ongoing bewildering love/hate relationship with American society requires a fresh evaluation of the role street culture plays in the continuing evolution of American popular culture" (Perkins, 1). As Jay-Z was raised from the underprivileged neighborhoods of Brooklyn, especially at a time where hip-hop (as an urban phenomenon) reached its second wave of talented MC's from the inner-city neighborhoods of South Bronx, Harlem, and throughout NYC (with the likes of LL Cool J, Kool Moe Doe, Big Daddy Kane, Eric B and Rakim, KRS-One, A Tribe Called Quest, De La Soul, Ultramagnetic MC's, to name a few), Jay-Z understood the integral relationship between hip-hop and street life by 'adopting' certain 'behavior patterns' within the musical genre. For instance, Jay-Z eloquently describes his 'adoption' towards hip-hop culture in association with ...read more.