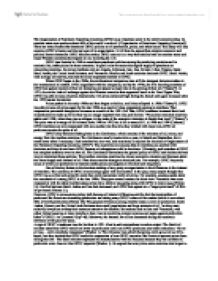 The Organization of Petroleum Exporting Countries.

The Organization of Petroleum Exporting Countries (OPEC) is an important actor in the world economy today. Its member states now produce about 40% of the world's crude oil ("Organization of Petroleum Exporting Countries"). There are many factors that determine OPEC policies on oil production, prices, and other issues. This essay will first examine OPEC's history and the top layer of its organization. It will then be argued that complex economic and political factors determine OPEC decisions today. OPEC must act in a way that satisfies both its member states and major Western countries that depend on oil, including the U.S. OPEC was founded in 1960 to coordinate petroleum policies among the producing countries and to maintain fair, stable prices for these countries. Its goal is also to ensure the regular supply of petroleum to consuming countries. Its eleven members now are Algeria, Indonesia, Iran, Iraq, Kuwait, Libya, Nigeria, Qatar, Saudi Arabia, the United Arab Emirates, and Venezuela. Muslim and Arab countries dominate OPEC. Saudi Arabia, with its huge oil reserves, has been the most important member of OPEC. When OPEC began in the 1960s, the multinational companies were still the strongest decision-makers in the international oil market. OPEC negotiated with the companies, and by the 1970s, the five founding members of OPEC had gained control of their oil industries and played a major role in the pricing of their oil ("History"). ...read more.

Moreover, the demand for oil has decreased during the economic downturn of the past few years. A sign of OPEC's weakness was the fact that in 1991 it had to ask nonmembers to reduce output. The Saudi oil minister stated that OPEC would not lower its production until non-OPEC producers also made reductions: "So we all lose... until everybody cooperates" (Washer 1). The ministers were afraid that prices could go as low as $10 a barrel, but they insisted that OPEC needs the cooperation of non-OPEC countries like Russia to prevent prices from falling that low. The Saudi minister expressed his dissatisfaction with the Russians because they did cut their oil production even close to what OPEC expected (Washer 1). He argued that every time some countries tried to gain a larger market share, all the oil producers lost in the end, as happened in the early 1980s and late 1990s. OPEC used a combination of diplomacy and threats to get outside countries to cooperate with it. "Oman had already pledged support, and Mexico...[in November 2001] said that it would reduce exports by up to 100,000 b/d next year" (Washer 1). A more recent example of internal differences in OPEC could be found in its last meeting in September 2002 in Osaka, Japan. The organization chose to ignore the difficult issue of quota allocations at this meeting, because each member state had its own view on the issue. ...read more.

OPEC has some power, but it has to act in a complex economic and political environment. It has to take into account the interests of its members, but it also has to carefully consider the countries that buy and consume the oil. OPEC also cannot have total control over the world's oil because there are large oil reserves outside of the eleven countries in OPEC. In addition to Russia, the former Soviet republics that are next to the Caspian Sea have large oil reserves that can produce millions of barrels a day probably before 2010. The huge swings in the price of oil in the past forty years indicate that OPEC has not totally accomplished one of its key goals, which is to maintain stable prices. However, the members of OPEC are still very much in favor of continuing their cooperation. That is why they are not walking out. Of course, Saudi Arabia and OPEC as a whole make sure that decisions do not offend any of the members. One reason is that decisions cannot be passed until all member states agree. The members of OPEC have common interests that they can pursue together. Most of them are Muslim countries, and all are developing countries. They all want their countries to advance in industry and technology, and their people to have a higher quality of life. To accomplish these goals, they need to have adequate income from selling oil to the outside world, especially Europe and the United States. OPEC will therefore continue to be an important actor in the world economy in coming decades. ...read more.