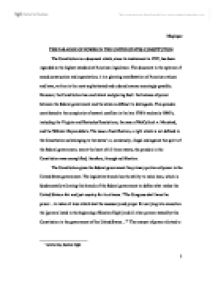 The paradox of power in the United States constitution.

Maglaque THE PARADOX OF POWER IN THE UNITED STATES CONSTITUTION The Constitution is a document which, since its instatement in 1787, has been regarded as the highest standard of American legislature. The document is the epitome of sound construction and organization; it is a glowing manifestation of American values and laws, written in the most sophisticated and ordered manner seemingly possible. However, the Constitution has one blatant and glaring fault: the balance of power between the federal government and the states is difficult to distinguish. This paradox contributed to the complexity of several conflicts in the late 1700's and early 1800's, including the Virginia and Kentucky Resolutions, the case of McCulloch v. Maryland, and the Webster-Hayne debate. The issue of nullification, a right which is not defined in the Constitution as belonging to the states' or, conversely, illegal and against the spirit of the federal government, was at the heart of all three events; the paradox in the Constitution was exemplified, therefore, through nullification. The Constitution gives the federal government the primary portion of power in the United States government. The legislative branch has the ability to make laws, which is fundamentally allowing this branch of the federal government to define what makes the United States a fair and just country for its citizens. "The Congress shall have the power...to make all laws which shall be necessary and proper for carrying into execution the [powers listed in the beginning of Section Eight] and all other powers vested by this Constitution in the government of the United States..."1 The amount ...read more.

In Jefferson's view, when the Supreme Court had declared the Alien and Sedition Acts constitutional, those three branches of government failed. It was then the states' duty to take action regarding the unconstitutionality of the Acts. Those in favor of the Alien and Sedition Acts argued that the Constitution gave only the judicial branch the power to determine whether a law was constitutional or not, and that if a law was to be nullified, it could only happen through the powers of the federal government. Because the Resolutions declared nullification of a law that had passed through the federal system, they were unconstitutional. Furthermore, the only body of government that can judge the constitutionality of a law is the Supreme Court - not the states. The Supremacy Clause, written by Luther Martin, put the federal government at a superior level to the state government. James Madison wanted to go so far as to take away all state legislative power; the Supremacy Clause was an attempt at a certain amount of compromise. It was this blurred compromise that eventually led to the added complexity in debates over nullification. "The Supremacy Clause makes the Constitution, federal laws, and treaties the supreme law of the land, elevating them above state constitutions and laws. The clause thus confers on the federal courts the power to enforce the Constitution against the states, giving implicit sanction to the federal courts' power to declare the state laws unconstitutional."8 At its most basic level, the Constitution is the highest legislative document in the United States - therefore rendering all other legislature void if they contradict with the Constitution. ...read more.

"I consider, then, the power to annul a law of the Union, contradicted expressly by the letter of the Constitution, unauthorized by its spirit, inconsistent with every principle on which it was founded, and destructive of the great object for which it was formed...Each state, having expressly parted with so many powers as to constitute, jointly with the other states, a single nation cannot, from that period, possess the right to secede, because such secession does not break a league but destroys a nation..."14 Jackson's fear of the consequences of secession - a destroyed nation - were proved later with the violent culmination of tensions that manifested themselves in the Civil War; these same tensions were the ones being discussed heatedly in the Webster-Hayne debate. The issue of nullification and states' rights were evident in Virginia and Kentucky Resolutions, the case of McCulloch v. Maryland, and the Webster-Hayne debate. The paradox of power within the Constitution only further complicated the issue of nullification in all three events. The ambiguousness in the appropriation of power between the federal government and states gave the parties representing both sides reasonable support from the Constitution in their arguments; no solution could be conceived because the Constitution did not offer a clear direction. That flaw in the Constitution - that it gives power to both the states and the federal government, which is impossible - makes the conflict of the issue of nullification in the Virginia and Kentucky Resolutions, the case of McCulloch v. Maryland, and the Webster-Hayne Debate so complex that it remained truly unsolved until after the conclusion of the Civil War. ...read more.