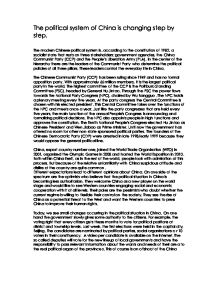 The political system of China is changing step by step. Discuss

The political system of China is changing step by step. The modern Chinese political system is, according to the constitution of 1982, a socialist state that rests on three stakeholders: government agencies, the China Communist Party (CCP) and the People's Liberation Army (PLA). In the center of the hierarchy there are the leaders of the Communist Party who determine the political policies of all three pillars. These leaders control the everyday life in China. The Chinese Communist Party (CCP) has been ruling since 1949 and has no formal opposition party. With approximately 66 million members, it is the largest political party in the world. The highest committee of the CCP is the Politburo Standing Committee (PSC), headed by General Hu Jintao. Through the PSC the power flows towards the National Party Congress (NPC), chaired by Wu Bangguo. The NPC holds a plenary meeting every five years. At the party congress the Central Committee is chosen with his elected president. This Central Committee takes over the functions of the NPC and meets once a year. ...read more.

On one side of the spectrum are the optimists who believe that the political situation in China is becoming less authoritarian. They welcome China as a new player on the world stage and would like to see Western countries engaging social and economic cooperation with it at all levels. Their poles are the pessimists who doubt whether the current regime is willing to flexible their control on the society. They see the rise of China as a potential threat to the West and want the Western countries to press China to improve their human rights. Today, we see small changes occurring in the political situation in China. On one hand the government slowly gives some authority to the citizens. For example, the voting right that every citizen gets these months to vote for political positions at district and township levels. Last week, the first elections were held in the capital city, Beijing. The candidates are nominated by political parties, social organizations or 10 voters in their constituency. ...read more.

The government blocked the politician's name on the net and if you wanted to type his name, there was just an error that occurred. In addition, a new rule regarding journalists' freedom was imposed. According to it, everything that is published should be screened and confirmed by multiple sources beforehand. This ensures that there are no rumors or lies spread by anybody. To my opinion, the optimists are the ones that will end up being right at the end. Slowly the government is being pushed to a more western and democratic way of organizing, controlling and managing the politics in the country. But the China Communist Party will not give up their control one day or another. They will not easily acknowledge this fact and will keep fighting to keep the complete authority in the country. We can see it in every way they are dealing with "the problems" these days. All this solutions by the government play into hands of the pessimists and indicate that the government is trying to keep its power. Sources: China daily, Shanghai daily, Wikipedia, Nu.nl ...read more.