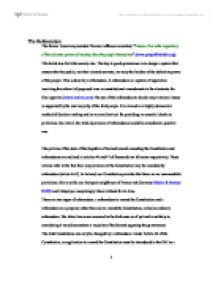 The Referendum The former American president Thomas Jefferson remarked, "I know of no safer repository of the ultimate powers of society, than the people themselves".(www.peoplefirstindia.org) This holds true for Irish society also. The key to good governance is to design a system that ensures that the public, not their elected servants, are truly the holders of the definitive power of the people. This is done by a referendum. A referendum is a system of legislation involving the referral of proposed laws or constitutional amendments to the electorate for final approval.(www.lectlaw.com) The use of the referendum to decide major national issues is supported by the vast majority of the Irish people. It is viewed as a highly democratic method of decision-making and as an excellent tool for providing an essential check on politicians. So overall, the Irish experience of referendums would be considered a positive one. The policies of the state of the Republic of Ireland toward amending the Constitution and referendums are outlined in articles 46 and 47 of Bunreacht na hEireann respectively. These articles refer to the fact that, any provision of the Constitution may be amended by referendum (article 46.2). In Ireland, our Constitution provides that there are no unamendable provisions, this is unlike our European neighbours of France and Germany (Butler & Ranney 94:80) and it displays a surprisingly liberal attitude for its time. ...read more.

In June 2001, the people of Ireland were asked to ratify the treaty of Nice, we were one of only three EU members (along with Denmark and France) who held a referendum on whether or not to do so. The treaty was rejected with a majority of 53.9% of the Irish people voting no, in what was the second lowest referendum turnout in the State's history. This is still a source of major embarrassment to the Government who are under considerable pressure to ratify the treaty in order to keep the momentum of EU integration and enlargement going. Other matters, such as alterations to the adoption laws and voting for non-citizens, have been largely uncontroversial with the proposed constitutional amendments supported by a great majority of the people. Probably the most striking change in terms of public legislation came about in 1995 when the country narrowly voted to bring in divorce. Less than 10,000 votes separated the two sides. In 1986, the same proposal had been defeated by a 63.5% majority.(www.worldpaper.com) Of course, one could not consider the main issues of Irish referendums without referring to the issue of Northern Ireland. The Anglo-Irish agreement, commonly known as the Good Friday Agreement, was put to the people of the Republic and the North of Ireland in a referendum on the 22nd of May 1998. ...read more.

An ideal example of this took place in Sweden in 1955, when the government neglected to honour the people's decision to continue to drive on the left-hand side of the road, so they could import cars from Germany. More recently, in the last week, presidential elections in Zimbabwe are to be investigated due to reports of a violent campaign, intimidation of the electorate and an uncertain result, which have sparked international alarm. To consult and then disregard the judgment of the people is worse than never to have sought an opinion initially. Some issues require deliberation and compromise rather than clear "yes" or "no" answers, referendums can restrict voters in this sense. Perhaps this provides a platform for the introduction of preferendums. A preferendum is a referendum in which members of the electorate can state, in appropriate order, his or her level of preference for each of a number of proposals. There has been much debate surrounding the possible introduction of this form of governance in the Republic of Ireland, not to replace referendums, but to be used in circumstances when the degree of complexity associated with the topic is such, that only giving the voters the option of a simple 'yes' or 'no' answer would not suffice. We have yet to use a preferendum here in Ireland, this is despite the fact that situations have arisen with regard to Constitutional amendment, which perhaps warranted its introduction into Irish politics. ...read more.