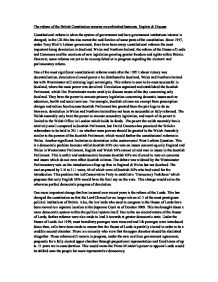 The reform of the British Constitution remains an unfinished business. Explain &amp; Discuss

The reform of the British Constitution remains an unfinished business. Explain & Discuss Constitutional reform is when the system of government and how government institutions interact is changed; in the UK this has also meant the codification of some parts of the constitution. Since 1997, under Tony Blair's Labour government, there have been many constitutional reforms the most important being devolution in Scotland, Wales and Northern Ireland, the reform of the House of Lords and Commons and the creations of new legislation granting greater freedom and rights within Britain. However, some reforms are yet to be accomplished or in progress regarding the electoral and parliamentary reform. One of the most significant constitutional reforms made after the 1997 Labour victory was decentralisation, devolution allowed power o be distributed to Scotland, Wales and Northern Ireland but with Westminster still retaining legal sovereignty. This reform is seen to be most successful in Scotland, where the most power was devolved. Devolution organised and established the Scottish Parliament, which like Westminster meets weekly to discuss issues of the day concerning only Scotland. They have the power to execute primary legislation concerning domestic issues such as education, health and social services. ...read more.

This has brought about a more democratic system within the political system itself. Due to the un-elected nature of the House of Lords, further reforms were also made to lead it towards at greater democratic state. Under the House of Lords Act 1999, most hereditary peerages were removed and life peerages were introduced. Since then, calls have been made to ensure that the House of Lords is partially elected in order to be a credible second chamber. There is a minority who view that the upper chamber should be abolished altogether. These reforms still remain in progress, under the new coalition government agreement; proposals for a fully elected upper chamber through proportional representation and fixed terms of up to 15 years are in consideration. This would mean the Prime Minister's power to appoint Lords would be shifted onto the people for more representative democracy. There has been little substantial reform in the Commons; a few examples are timing-related changes such as the moving of Prime Ministers Questions from 1500 to midday on Wednesdays and the cutting of PMQ from 2 sessions per week to just 1. Also, time-efficient changes such as allowing MPs to vote electronically from inside the chamber and scrapping sittings on Fridays to allowed visitors to view and learn about parliament. ...read more.

The access to these documents would lead the government be scrutinised more ensuring they act in the best interests of the public. A fundamental example of the act operating is infamous Expenses Scandal of 2008 whereby Human Rights campaigners acquired the details of ministerial expenditure, which was then leaked to the public. This was an important step to clarifying the constitution and making government accountable to its people, and one of the few examples of the Freedom of Information Act in action. However, an event that undermines the FOI Act was when the Justice Secretary Jack Straw vetoed the publication of cabinet minutes over Iraq, showing that information would only be publicized when in the best interests of the executive. This is a constitutional reform that remains to be judged due to its short existence, the rights of citizens need to be clarified clearly in order to democratize Britain fully. In conclusion, Britain has made significant constitutional reforms and is progressing towards further improvements but currently the full extent of reforms are yet to be accomplished with many reforms being incomplete as in devolution, reform of parliament and other such matters. So, it could therefore be said that today, the reform of the British Constitution does still remain an 'unfinished business'. ...read more.