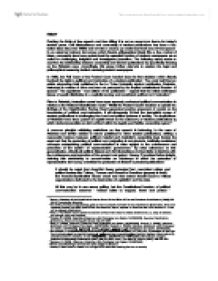 ESSAY Pushing the limits of free speech and then killing it is not an uncommon theme for today's student press. Civil disobedience and censorship of student publications has been a hot-button issue since the 1960s and remains a crucial, yet under-examined area of free speech. In an assumed tolerant democracy which flaunts philosophical ideals like a free market of ideas, censorship laws have undermined the essential function of student newspapers as an outlet for challenging, insightful and investigative journalism. The following essay seeks to examine the relationship between censorship and student publications by specifically drawing on the Rabelais case. Accordingly, this essay further attempts to explore the legal and philosophical reasoning behind censoring student newspapers. In 1998, the Full Court of the Federal Court handed down its first decision which directly involved the right to political communication of a student publication1. The court held that an article advocating theft published in the La Trobe University student publication, Rabelais, instructed in matters of crime and was not protected by the implied constitutional freedom of speech.2 The appellants - four editors of the publication - argued that the article addressed issues of wealth distribution in a capitalist society and constituted political communication.3 Prior to Rabelais, Australian courts have never squarely confronted political communication in relation to the National Classification Code.4 Whilst the Federal Court's decision to uphold the findings of the Classification Review Board generated another proponent of control ...read more.

Bill of Rights expressly protect the rights of individuals to free speech, but an implicit rule applied by U.S. courts entitles student journalists to the highest level of First Amendment protection to sustain the traditional libertarian function of student publications. 14 The rule that student publications enjoy freestanding exemptions of restrictions underlying the First Amendment emanates from legislation based in the state of California, which expressly duplicates First Amendment rights to college and university students. 15 One can hardly ignore the advantageous effects of a similar law being implemented in Australia. Like the United States, it is widely maintained that student publications in Australia should remain wide-open free speech zones, where every form of speech is permitted and censorship controls are turned off.16 However, the recent introduction of the Voluntary Student Unionism bill17 before parliament has additionally threatened the agenda of student publications. Although the bill, which traces back to 197418, sets out to render universal student unionism voluntary, it could potentially be the first law that directly undermines students' right to free speech by defunding Australia's student press19. The Western Australian (WA) VSU model, which came into force in 1997, has cut funds directed to all student publications in the state, while other student advocacy bodies were lost completely.20 In conclusion, although Australia has a robust commitment to freedom of speech, on a practical level, this commitment is too often regulated by prevailing moral and legal protocols. ...read more.

Clayton also points out that a publication which incites crime must be banned under regulations by the OFLC, even though the publication may be of political nature. Note 4. 12 Note 4. See also Clayton, M. 1998 'Censorship, Free Speech and the Rabelais Case,' Legal Date, Vol. 10, No 1.; Clayton, M. and Borgeest, T. 1998, 'Free Speech and Censorship after the Rabelais Case,' Media and Arts Law Review, Vol. 3 at 194 13 Note 1. The Rabelais edition also discussed political issues of death penalty in the United States and pending execution of a former black activist, Mumia Abu Jamal 14 Goodman, M. (2005). Interview. [Interview with Christopher van Opstal, 23/05/2005] 15 Pursuant to s 76120 of the California Education Code, the 'governing board of a community college shall adopt rules and regulations relating to the exercise of free expression by students'. See California Education Code Section 66301. 16 Boey, H. (2005) Interview. [Interview with Christopher van Opstal, 19/05/2005] 17 Higher Education Support Amendment (Abolition of Compulsory Up-front Student Union Fees) Bill 2005 18 Aldrich, F. (2005). Interview. [Interview with Christopher van Opstal, 27/05/2005] 19 Note 13. If impending VSU is passed by the Senate in July, it will be necessary to cut funds to the printing of student publications. This will result to the disappearance of most student publications. 20 Hastings, G. (2004) 'VSU Legislation Experiences in WA, Victoria, and Federally,' NUS Research at 5 21 Pollak, M. 1990, Sense and Censorship, Reed Publishers, Sydney, at p. 284 ?? ?? ?? ?? ...read more.