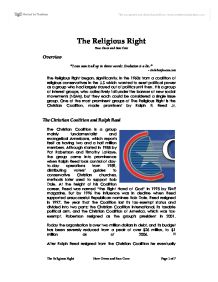 The Religious Right Huw Owen and Sam Cove Overview "I can sum it all up in three words: Evolution is a lie." - christianforums.com The Religious Right began, significantly, in the 1960s from a coalition of religious conservatives in the U.S which wanted to exert political power as a group who had largely stayed out of politics until then. It is a group of interest groups, who collectively fall under the banner of new social movements (NSMs), but they each could be considered a single issue group. One of the most prominent groups of The Religious Right is the Christian Coalition, made prominent by Ralph E. Reed Jr. The Christian Coalition and Ralph Reed The Christian Coalition is a group mainly fundamentalist and evangelical Americans, which reports itself as having two and a half million members. Although started in 1988 by Pat Robertson and Timothy LaHaye, the group came into prominence when Ralph Reed took control of day-to-day operations from 1989, distributing voters' guides to conservative Christian churches, methods later used to support Bob Dole. At the height of his Coalition career, Reed was named "the Right Hand of God" in 1995 by TIME magazine. ...read more.

Methods Focus on the Family use a lot of different tactics to get their point across. Their chairman (James Clayton "Jim" Dobson, Ph.D.) produces the daily radio program (of the same name) Focus on the Family, which is broadcast in more than a dozen languages and on over 7,000 stations worldwide, and heard daily by more than 220 million people in 164 countries. Focus on the Family is also carried by about 60 U.S. television stations daily. The group also provides free counselling and resources for families facing difficulties and they publish a variety of magazines, videos and audio recordings. The group have also began publishing a new political magazine called Citizen which addresses political concerns, especially on issues where current public policies are seen as threatening to conservative families. FotF also produces a children's radio drama entitled Adventures in Odyssey. It began in 1987 as Family Portraits, starring an elderly Christian gentleman named John Avery Whittaker (aka "Whit"), who runs a popular ice cream shop/"discovery emporium" called Whit's End; and he imparts Christian wisdom to the children of the town of Odyssey. This is a way of promoting Christian values to young children. ...read more.

Dobson from Focus on the Family often had conference call meetings with campaigners such as Rove, and later Ralph Reed, to organise the national campaign. However there were calls from the conservative Christians that they were way ahead of GOP advice. Lori Viars, co-chair of the GOP committee for her county said "By the time the Bush campaign said, 'You should do voter registration through churches,' we were already doing that" (5). Voter registration in some areas soared when church goes started to give cards out to their friends to encourage voting Bush. One major reason for evangelical support of the Republican Party was Bush's conservative anti-same s*x marriage stance. And after Massachusetts's high court approved same-s*x marriages, they were fuelled into campaigning for a definition of 'marriage being between a man and a woman' constitutional amendment. The Bush administration was consequently criticised for delaying putting this amendment to the floor, with Rove continuously promising a forthcoming endorsement. However when the Senate finally rejected it, this caused a huge conservative uproar which lead to 13 states eventually banning it themselves. This further brought conservative family-values into the election arena. In judicial nominations however, Bush did please the conservative right by nominating Chief Justice John Roberts and Samuel Alito to the Supreme Court, both considered conservative choices on matters such as abortion. ...read more.