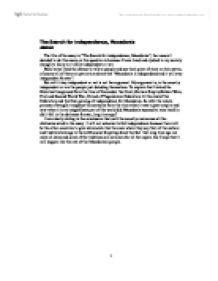 The Search for independence, Macedonia

The Search for independence, Macedonia Abstract The title of the essay is "The Search for independence, Macedonia", the reason I decided to do this essay on this question is because I have lived and stydied in my society enough to know is it really independent or not. Back home I had the chance to talk to people and see their point of view on this matter, of course all of them are patriotic and say that "Macedonia is independend and it will stay independetn forever". But will it stay independent or not is not the argument. My argument is, is the country independent or are the people just deluding themselves. To explain that I stated the Historical bacground from the time of Alexander the Great,Otoman Empire,Balkan Wars, First and Second World War, Period of Yugoslavian Federation till the end of the Federation and the final gaining of independence for Macedonia. So after the whole process of struglle troughout the centuries from the time when it was a great empire and now when it is an insignificant part of the world did Macedonia sucseed to raise itself or did it fall in the darkness forever, long time ago? I am clearly stating in the conclusion that until the country overcomes all the obsticales sated in the essay it will not acheeve its full independence because there will be the other countries to give statements like the ones where they say that all the culture and tradition belongs to them.Of course forgeting about the fact that long time ago we were all slavs and some of the traditions are common for all the region. but I hope that it will happen like the rest of the Macedonian people. Introduction Macedonia is a crossroads where East and West meet, where European and Asian civilizations unite to create new values. Macedonia is the heart of Balkan Peninsula. ...read more.

Is it really independent...? This country cannot be viewed as worth as it was, if it did not in first place follow the roads taken by other civilized societies. And Macedonia did. Macedonia was an active member of an old culture and civilization that was absolutely important for creation of an independent Macedonian State. When talking about the independence of Macedonia, we must not forget that one of the first steps is creation of the Macedonia is Macedonian language. That language, the Old Church Slavic language had been common language among all southern and eastern Slavs and partly among the western Slavs. Cyril and Methodius (855 after Christ) were the founders of Slavic literacy and literature. They were born in Thessaloniki (Solun) but the brothers were achieved full success precisely in Macedonia. Later they would spread to the other Slav countries. The oldest preserved Cyrillic monument has been discovered in Macedonia. Some of the best known documents in Slavonic literacy, written in Cyrillic where elements of the Macedonian version are to be found, originate from Macedonia. They show that Macedonian people were a highly cultured people, and they left traces within the cultural heritage of the Slavs as well as in civilization of the world in general. Along with its cultural development which is very important to be independent as State, worth to mention is that the doors of democracy were always open in Macedonia and for everyone. Macedonia in the past, or former Macedonia and today was and is democratic country. I think that in Balkan and wider region there is not country that has such a democracy and inter-ethnic permanent improvement like Macedonia does. When we compare the human rights and life conditions in this region, we can get a conclusion that all ethnic groups and particularly the largest one as Albanian is, would rather choose to live in Macedonia than in other neighboring countries. ...read more.

As a consequence, the Greeks argue, the government of Macedonia has no right to use symbols or names dating back to the ancient period as an expansion of national identity today example is the flag5 which had to be changed. Macedonia as very flexible and tolerant country have changed its signs and adapted to its own history. Conclusion As young a man, who has been for a period of one year out of my own country, I had nice opportunity to see another country and its way of life. I saw a real democracy, and I felt it. And I saw very well organized society and people, which can call them selves Norwegians with proud. I also lived in a multinational college with students all over the world where I found out that the History is completely different from the one back home and I am not saying that the one back home is the correct one but I can see that some countries like Serbia are keen enough to change their previous history in order to get more tollerance and help from other more developed countries (Greece). Probably due to the history or its surroundings, my country has to pass a lot of additional hardships to become a modern and developed society. I have no doubt that it will happen, but I have a little doubt when it would be. When I think of the whole history I would say that there is still a chance, the country has to overcome the obstacles like the erasing of history and agree with the neighboring countries about the name, culture, language ... Than it can say that it is completely independent. Something what is evident, there is so much things to be concerned about, such as quicker and easier transition to modern society, evolution of economy, technology, improvement of civil society and humanity as whole. Essential component is education that is for luck no longer stumbling block. I am sure we will succeed also in making the world favor to us. It is important for us, as we are part of this changing world. ...read more.