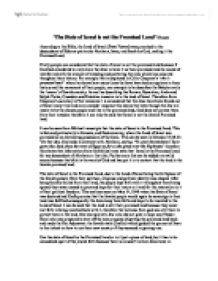 The State of Irael is not the Promised Land

‘The State of Israel is not the Promised Land’ Discuss

According to the Bible, the Land of Israel (Eretz Yisrael) was promised to the descendants of Hebrew patriarchs Abraham, Isaac, and Jacob by God, making it the Promised Land.

Firstly people can considered that the state of israel is not the promised land because if God had considered to only allow the Jews to have it as there promised land he would of interferrred with the amount of invading and scattering the jews which has occurred thoughout there history. For example this is displayed in Colin Chapman’s ‘who’s promised land’  where he shows how many times the Jews have had corruptions in there history and the movement of their people, one example is he describes the Babylon exile the ‘cream’ of Jewish society. As well as describing the Roman, Byzantine, Arabs and Seljuk Turks, Crusaders and Palestine invasion in to the land of Israel. Therefore from Chapman’s summary of the invasions it is considered that the Jews have been forced out of Israel many time and as an outsider response this shows that even though the Jew are meant to be the chosen people and live in the promised land, God does not protect them from their invaders therefore it can truly be said that Israel is not the Jewish Promised land.

It can be seen from Biblical transcripts that the state of Israel is the Promised Land. This is featured particularly in Genesis, and Deuteronomy, where the Land of Israel was promised as an everlasting possession of the Jews.  This can be seen in Genesis 15:18-21: ‘On that day, God made a covenant with Abraham, saying: "To your descendants I have given this land, from the river of Egypt as far as the great river the Euphrates’ therefore this shows that information from the biblical texts state that  Israel is the Promised Land for any descendent of Abraham or his tribe. Furthermore this can be added a as valid source because the bible is the word of God and has put it in to context that the land is the Jewish promised land.

The state of Israel is the Promised Land, due to the Land of Israel being the birthplace of the Jewish people. Here their spiritual, religious and political identity was shaped. After being forcibly exiled from their land, the people kept faith with it throughout them being spread they never ceased to pray and hope for their return to it and for the restoration in it of their political freedom. This can been seen on May 14, 1948 when the State of Israel was declared and God's promise that the Jewish people would again be sovereign in their land was fulfilled consequently the Jews keep there faith and hope to be reunited to the Land of Israel it can be said that the land is still their promised land because they never lost faith in being reunited back with it, therefore the holiness from god was still there to protect them in the land. One example of a Jew who did not give in hope was Thedor Herzl who was prepared to start off the new progress of getting the promised land back and made the Der Judenstaat: the Jewish state (Leaflet) which guided the poorest of Jews to the richest on how to run there new country if they succeed in gaining one.

Can the state of Israel be the Promised Land or is it just a piece of land, but it has to be considered apart of the jewish faith because there is around 5 million Jews have re-entered Israel because of the Law of Return. The law of return is evident because it allows for ‘any Jew has the right to ‘return’ to Israel.’ therefore is it the idea that the state of Israel can be considered the promised land because everything which has occurred in Jewish history, for example The Holocaust, several exiles and several separation, the Jews still were willing to return to Israel and this idea of keep returning to Israel shows there trust in and returning to God so it has kept the land promised to them.

It is not possible to state whether an area of land is promised to selected people is because even though the Jews went though a lot to sustain this land it is not possible to be aware of whether or not god is still relating to the idea that the Jews require a promised land as they have proved to god, though such actions like the holocaust that they are able to stand up and regain strength after a set back.

To conclude the Promised Land is considered to be the state of Israel and its Jewish settler but it can only be advised by Jewish faith and the bible. As there have been many occurrence which have lead to the Jews being invade and evacuated from Israel can it really be consider the promised land as they have been taken from it so many times.  As well the idea of the Promised Land could be considered to be more of a test to the Jews, this can be considered because if they believed they had a certain chosen area then would they only contact god from there or would they do it outside this Promised Land.