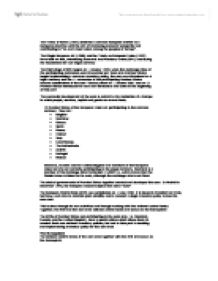 The Treaty of Rome (1957) declared a common European market as a European objective with the aim of increasing economic prosperity and contributing to &quot;an ever closer union among the peoples of Europe&quot;.

The Treaty of Rome (1957) declared a common European market as a European objective with the aim of increasing economic prosperity and contributing to "an ever closer union among the peoples of Europe". The Single European Act (1986) and the Treaty on European Union (1992) have built on this, introducing Economic and Monetary Union (EMU) and laying the foundations for our single currency. The third stage of EMU began on 1 January 1999, when the exchange rates of the participating currencies were irrevocably set. Euro area Member States began implementing a common monetary policy, the euro was introduced as a legal currency and the 11 currencies of the participating Member States became subdivisions of the euro. ...read more.

They are: * Belgium * Germany * Greece * Spain * France * Ireland * Italy * Luxembourg * The Netherlands * Austria * Portugal * Finland Denmark, Sweden and the United Kingdom are members of the European Union but are not currently participating in the single currency. Denmark is a member of the Exchange Rate Mechanism II (ERM II), which means that the Danish krone is linked to the euro, although the exchange rate is not fixed. The elected governments of Member States together created and developed the euro. In Madrid in December 1995, the European Council adopted the name "euro". ...read more.

The Eurosystem The national central banks of the euro area together with the ECB are known as the Eurosystem. The Eurosystem's primary objective is the maintenance of price stability. It meets its objectives through: * deciding and implementing monetary policy; * conducting foreign exchange operations; and * operating payment systems. The NCBs of the participating Member States played a key role in the smooth transition to the euro. Their responsibilities have included: * introducing the euro in their respective countries; * managing the changeover from national currencies to the euro; * creating the necessary systems to effectively circulate the euro banknotes and coins; * withdrawing national currencies; and * providing advice about and promoting the use of the euro. ...read more.