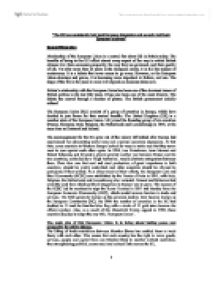 "The UK has consistently held back European integration and as such, held back European business" General Discussion Membership of the European Union is a central fact about life in Britain today. The benefits of being in the EU affect almost every aspect of the way in which British citizens live: their economic prosperity, the way they are governed, and their quality of life. Yet after more than 25 years in the European Union, it is still the subject of controversy. It is a debate that never seems to go away. However, as the European Union develops and grows, it is becoming more important to Britain, not less. The shape of the EU in the years to come will depend on decisions taken now. Britain's relationship with the European Union has been one of the dominant issues of British politics in the last fifty years. It has also been one of the most divisive. The debate has moved through a number of phases. The British government initially refused The European Union (EU) consists of a group of countries in Europe, which have decided to join forces for their mutual benefits. The United Kingdom (UK) is a member state of the European Union. UK joined the founding group of six countries (France, Germany, Italy, Belgium, the Netherlands and Luxembourg) in 1973, at the same time as Denmark and Ireland. The encouragement for the EU grew out of the misery left behind after Europe had experienced two devastating world wars and a serious economic depression. At that time, some countries in Western Europe looked for ways to make sure that they never went to war against each other again. In 1950, two Frenchmen, Jean Monnet and Robert Schuman, put forward a plan to prevent another war between France and the two countries, controlled by a 'High Authority', would eliminate antagonism between them. Their idea was that coal and steel production, of great importance to both countries, should be jointly controlled, and other countries should be allowed to participate if they wished. ...read more.

Monetary Union is the process whereby the exchange rates of a group of members are permanently fixed, or replaced by a single common currency. It also implies the existence of one monetary authority with responsibility for the growth of money supply, interest rate policy, exchange rate policy and control of foreign currency reserves. * Economic union implies: * A single market free of barriers to trade in goods and services, or capital and labour movements * The ability of firms to be able to compete freely through a competition policy implemented throughout the market to strengthen its operation * A social policy to demonstrate the benefits of the single currency to the consumers * The co-ordination of macroeconomic policy (particularly the alignment of inflation rates), and harmonisation of fiscal policy. Economic and monetary union (EMU) has been a recurring ambition of the European Union since the late 1960s, because it promises both currency stability and a strong advance towards the integration of Europe. However, a variety of political and economical obstacles had barred the way the signing of the Maastricht Treaty in February 1992. At various times, there have been factors, which have all played their part in frustrating progress towards EMU. These factors are the weak political commitment, divisions under economic priorities, lack of economic convergence and developments in internal currency markets outside the Unions control. The EMU, will have a number of effects on the UK. To start with, under the combined effects of EMU and the Stability Pact, which regulates deficits, the UK will lose its currency, its pound, it will lose its fluctuating exchange rate, it will lose control of its interest rates, it will lose the control of its money supply, it will lose its ability to deficit finance (except in very narrow limits); and it will lose its national bank and management control over its national reserves. The UK knows that they cant be properly regarded as an independent political entity without these rights and, further, that the European Union, through the European Central Bank will be acquiring, effectively, almost all of the characteristics of a Sovereign State. ...read more.

How shall I be able to fight for the jobs for the people of Liverpool if I have no access to funds? Britain has always been a great trading nation. But maintaining this position depends upon our relations with the rest of Europe.......... In every other EU member, the single currency is seen as a political prize for which there may be an economic cost. The French Prime Minister and even the German Chancellor have admitted that EMU could be painful, at least in the short term. Only in Britain is the euro advocated on economic grounds. In order to make an economic case for EMU, supporters have had to exaggerate its advantages while glossing over its costs. UK membership of EMU would drive up taxation. Those most closely involved with monetary union expect it to be accompanied by tax harmonisation. Under a single currency, transfer payments from the richer areas of the euro zone to the poorer areas will be the only way to offset downturns in the poorer areas, in the absence of flexible interest rates. Indeed, many European politicians support the euro precisely because they see it as a step to fiscal union, and thus to political union. The UK would almost certainly be a large net contributor under any over-arching fiscal policy. Britain today has the most competitive tax regime in the EU. Any harmonisation of fiscal policy would therefore damage British business. When you weigh up the pros and cons of the single currency you will find that the pros weigh more, of course the UK entering the Single currency will be at a cost but how long will the UK be able to stay out of single currency, European businesses will eventually decide not to trade with the UK because they can cut costs trading within the single currency zone, similarly outward investment may drop because foreign companies may decide to set up in France because their supplies of materials are in Germany. It is really a time to decide if Britain is just Britain or is Britain European. Word Count: 3, 836 1 ...read more.