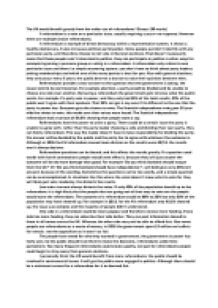 Transfer-Encoding: chunked ﻿The UK would benefit greatly from the wider use of referendums? Discuss (30 marks) A referendum is a vote on a particular issue, usually requiring a yes or no response. However there are multiple choice referendums. A referendum is example of direct democracy within a representative system, it shows a healthy democracy. It also increases political participation. Some people just don?t identify with any particular party, and therefore choose to not vote in General elections. That doesn?t necessarily mean that these people aren?t interested in politics, they can participate in politics in other ways for example by joining a pressure group or voting in a referendum. A referendum only relates to one particular issue and there?s a simple answering system, you don?t have to think about party leaders, joining memberships and which one of the many parties is best for you. ...read more.

The Scottish independence referendum had a turnout of 84.6% showing that people want a say. Referendums have the power to unite a party. There could be a certain issue the party is unable to agree with, rather than the party leader choosing a side and dividing their own party, they can hold a referendum. This way the leader doesn?t have to take responsibility for dividing the party, the answer will be decided by the public and the party has to agree with whatever the outcome is. Although in 2016 the EU referendum caused more division as the results were 48/51, the results aren?t always decisive. Referendum questions can be biased, and this affects the results greatly. If a question used words with harsh connotations people would vote affect it, because they will just assume the outcome will be do more damage than good. ...read more.

If one side has more funding, they can advertise their side better. They can post information biased to them in all homes across the UK. Whereas the other side may not be able to afford this. Also some people see referendums as a waste of money, in 2016 the government spent £9 million on leaflets for remain, not the opposition so it wasn’t as fair. The people have voted for who they wanted in government, the government in power has fairly won. So the public should trust them to make the decisions, referendums undermine parliament. Too many frequent referendums could create apathy, not just for referendums people could begin to stray away from general elections. I personally think the UK would benefit from more referendums, the public should be involved in controversial issues. It will get the public more engaged in politics. Although there should be a minimum turnout for a referendum for it to deemed fair. ...read more.