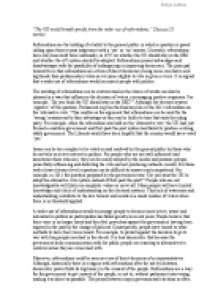 The UK would benefit greatly from the wider use of referendums. Discuss.

﻿Robyn Ashton ?The UK would benefit greatly from the wider use of referendums.? Discuss (25 marks). Referendums are the holding of a ballot to the general public in which a question is posed calling upon them to pass judgement with a ?yes? or ?no? answer. Currently, referendums have only been held twice nationally; in 1975 on whether the UK should stay in the EEC and whether the AV system should be adopted. Referendums present advantages and disadvantages with the possibility of endangering or improving democracy. The principal turnout for is that referendums are a form of direct democracy being more conclusive and legitimate than parliamentary votes as everyone eligible to vote is given a voice. It is argued that a wider use of referendums would reconnect people with politics. The wording of referendums can be controversial as the choice of words can also be phrased in a way that influences the decision of voters, encouraging positive responses. ...read more.

For people who are not well-informed (and sometimes those who are), they can be easily swayed by the media and pressure groups, powerfully influencing and distorting the vote and not producing authentic results. For those with a lower literacy level a question can be difficult to answer and comprehend. For example, in 2011 the question proposed by the government was ?Do you want the UK to adopt the alternative vote system instead of first-past-the-post?? People who are not knowledgeable will likely on simplistic values or not at all. Many people will have limited knowledge and a lack of understanding on the electoral systems. This lack of awareness and understanding contribute to the low turnout and results in a small number of voters when there is no threshold applied. A wider use of referendums would encourage people to become more active, aware and interested in politics as participation has fallen greatly in recent years. ...read more.

In this time period governments can, for the most part, make decisions without any public consultation. There is therefore a danger that although these officials are elected as representatives, it is only the opposition parties and the checks and balances outlined in constitutions that prevent them from deviating from their original promises. Referendums allow the government to not only gauge public opinion on policy but also to make clear that the decisions they are making are in line with public attitude on issues concerning them, therefore providing another check against the power of government. Conclusively, referendums provide a vital direct link between government and the electorate which is otherwise unseen in representative democracies. They can help to promote political participation as well as creating a better informed electorate; they also strengthen democracy in modern society. Yet referendums, despite all of this are often criticised for the way in which they weaken elected bodies and do not provide a true gauge on public opinion, largely due to media influence. ...read more.