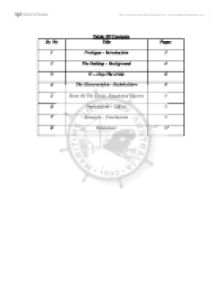 Table Of Contents Sr. No Title Pages 1 Prologue - Introduction 2 2 The Buildup - Background 4 3 D - Day-The crisis 6 4 The Heavyweights -Stakeholders 6 5 Roots Of The Crisis- Situational Factors 8 6 Implications - Effects 8 7 Synopsis - Conclusions 9 8 References 10 Prologue Workplace Relations Act The Waterfront Crisis was a conflict between the Maritime Union of Australia (MUA) and Patrick Stevedores, which captured national media attention during 1998 and directly involved tens of thousands of Australians through mass picket lines and community rallies in support of the union. It captured the attention of the world as workers all round the world waited in anxiety and impatience for a result that had far reaching implications. For many Australians, it was as though Berlin Wall of the waterfront had fallen. Patrick Stevedores in a late night surge, dismissed about 1400 of its workers registered with the MUA. In a bitter and constitutional altercation, the MUA and Patrick Stevedores fought, before the result was announced 5 weeks later. John Howard had won a very closely fought election beating incumbent Keating to come to office in March 1996, appealing to those sections of the working class and middle class deeply disenchanted with the Labor government and the cuts it had imposed in the standard of living. (WSWS.org 1998). He promised to improve efficiency and the labour market by substantially restructuring industrial relations. ...read more.

(Nov. 1994) which had planned a major overhauling of traditional work practices followed by the wharfies. There was a sudden surge in major disagreements between employers and the MUA as the relations soured. With the return of the Liberals back in power things were beginning to look ominous for the workers, with the govt. indicating and hinting at a crackdown leading to sweeping reforms. In September 1997 a small port operator in Cairns Queensland, International Purveyors, attempted to bring in non-MUA labour employed under Australian Workplace Agreements. But the MUA sought international union support through the International Transport Workers Federation (ITF) to hamper the port operations. The company quickly reverted to employing its former employees. Allegations between Patrick and MUA started to fly thick and fast till 28th January 1998. D-Day On 28-29 January 1998, waterfront events escalated when Patrick locked its employees out of its Webb Dock operation in the port of Melbourne at midnight (The Australian 1998). This had a domino effect with ideological clashes being the order of the day as things went from bad to worse. On 2 April, another union, the Australian Workers Union, threatened to shut down oil refinery operations in support of the MUA members locked out of Webb Dock. However caution prevailed and the union did not carry out its threats (Dept. Of Parliamentary Library 1997 - 98) On April 7, the dispute escalated massively. It proved to be a long and a winding night in which, without any warning, all dockworkers employed by Patrick (a total of over 2000 people) ...read more.

Implications * With matters concerning illegal conspiracy, freedom of association and breach of employment contract issues, there was serious mistrust among the warring parties, which continues today. * It brought to the fore, the monopoly and the oversupply of labour at the Waterfront leading to over pricing that caused Patrick Stevedores to pull the trigger. * The protracted nature of the dispute had very costly short- term consequences; e.g. export of perishable items was stalled leading to rotting of consumables as the relations (SMH, 14th May 1998). * The waterfront dispute had significance because of the in-depth debate on waterfront efficiency and productivity and because of its implications for the conduct of general industrial relations. * The settlement on the docks denied the great conspiracy trial (Adams 2000). Synopsis * It was a story of ex- military men, treachery among comrades, family feuds, clandestine meetings, lies, deceit, back door negotiations & dirty mud slinging. * On the basis of the High Court judgment of May 4, 1998 supposedly securing reinstatement, at least half the workers were told there was no work for them. * The final judgement ordered Patrick Stevedores to pay 7.5 million to small businesses damaged by the boycotts during the dispute. (SMH, 1998) * The crisis, for the first time since the 1930's brought non-Union labour on the wharves though only briefly. * The dispute with the Australian waterfront workers brought to the surface the deep-seated crisis of political perspective in the workers' movement. ...read more.