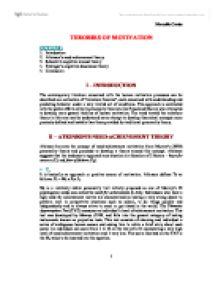 THEORIES OF MOTIVATION OUTLINE: 1. Introduction 2. Atkinson's need-achievement theory 3. Schacter's cognitive arousal theory 4. Festinger's cognitive dissonance theory 5. Conclusion I - INTRODUCTION The contemporary literature concerned with the human motivation processes can be described as a collection of "miniature theories", each concerned with understanding and predicting behavior under a very limited set of conditions. This approach is contrasted with the global efforts of early personality theorists like Freud and Murray who attempted to develop more general theories of human motivation. The trend toward the miniature theory in this area can be understood as an attempt to develop theoretical concepts more precisely defined and testable than those provided by traditional personality theory. II - ATKINSON'S NEED-ACHIEVEMENT THEORY Atkinson borrows the concept of need-achievement motivation from Murray's (1938) personality theory and proceeds to develop a theory around this concept. Atkinson suggests that the tendency to approach any situation is a function of 2 factors - hope for success (Ts) and fear of failure (Taf). * Ts It is basically an approach or positive source of motivation. Atkinson defines Ts as follows: Ts = Ms x Ps x Is. Ms is a relatively stable personality trait initially proposed as one of Murray's 20 psychogenic needs was called the need for achievement (n Ach). Individuals who have a high need for achievement motive are characterized as having a very strong desire to perform well in competitive situations such as school, to do things quickly and independently and to always strive to excel or get ahead in the world. ...read more.

Disadvantages - Although this theory is capable of making very precise, quantitative predictions, it will only make these predictions under a very limited set of conditions. He specifically states that the theory should be applied only in situations that meet the following 3 conditions: a. There must be some risk involved in making the choice so that the hope for success and the fear of failure are meaningful concepts. b. The individual must feel responsible for the outcome c. The individual must know the outcome of his choice immediately. A number of other less obvious problems with the theory add further limitations to the conditions under which precise predictions can be made. * The theory faces the problem of explaining why high Maf, low Ms subjects approach competitive situations at all. Atkinson's answer to this problem is to suggest that choices made by such individuals are motivated by factors other than Ms and Maf that he calls 'extrinsic factors'. These factors are assumed to motivate choice behavior in individuals with equal Ms and Maf scores. * The theory ignores factors such as financial gains and other benefits. Many situations meet the boundary conditions specified by Atkinson but contain factors other than Ms, Maf and Ps acting as a more powerful basis for predicting behavior. Again, Atkinson can appeal to the extrinsic motivation factors to explain the outcome, but only after the fact. ...read more.

The same physiological change can, under the appropriate conditions, be interpreted as l**t, anger, fear or euphoria. Schachter's theory also predicts certain qualitative changes in the individual's behavior, whereas Atkinson's theory is capable of more precise quantitative predictions. The failure to precisely define theoretical concepts in terms of specified operations often generates experimentation dealing with a wider range of phenomena that found with more precise, quantitative theories. This point is very well illustrated by the recent extension of Schachter's basic ideas to the motivational state of 'hunger' as studied in both obese and normal weight individuals. Their results support the notion that normal weight individuals have the ability to label their internal physiological state (hunger v/s satisfaction) and ignore cognitive an environmental input that signal them to eat. The obese person, however, appears to ignore the physiological state and eating behavior is controlled largely by external factors such as the ready availability of the food. Nisbett (1968) reported similar results indicating again that the obese individual is unresponsive to internal deprivation states but highly responsive to external factors such as the taste of food. Goldman et al (1968) similarly reported that fat students are less tolerant of typically bad dormitory food than normal weight students. One cannot deny that Schachter's research over the last decade has indicated that cognitive factors can exercise considerable control over physiological motivational states. Indeed, there is every indication that the basic ideas first outlined by Schachter and Singer (1962) will be applied to an increasing number of motivational phenomena. Marcelle Cruise 1 ...read more.