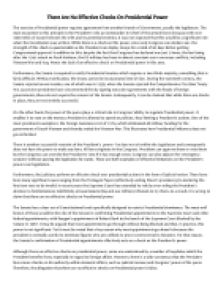 There Are No Effective Checks On Presidential Power. Discuss

﻿There Are No Effective Checks On Presidential Power The exercise of Presidential power requires agreement from another branch of Government, usually the legislature. The main exception to this principle is the President?s role as Commander-in-Chief of the armed forces because with over 3000 miles of ocean between the USA and its potential enemies, it was not expected that this would be a significant role when the Constitution was written. While there is a check on this power, since only Congress can declare war, the strength of this check is questionable as the President can deploy troops for a total of 60 days before getting Congressional approval. In addition to this, despite the fact that Congress has declared war just 5 times, the last being after the 1941 attack on Pearl Harbour, the US military has been in almost constant use in overseas conflicts, including Vietnam War and Iraq. ...read more.

It enables it to vote on the money a President is allowed to spend on policies, thus limiting a President's actions. One of the most prominent examples is the Foreign Assistance Act of 1974, which eliminated all military funding for the government of South Vietnam and thereby ended the Vietnam War. This illustrates how Presidential influence does not go unchecked. There is another successful restraint of the President's power - he does not sit within the Legislature and consequently does not have the power to make any laws. All laws originate in the Congress. President can approve them or veto them but the Congress can override the President's veto if it has enough votes. Congress can also adjourn his ?emergency sessions? without passing the legislation he wants. ...read more.

It may be argued that most appointments go through without being blocked and that, in practice, this power is not significant. Yet it must be noted that a key reason why most appointments go ahead is because the president is normally careful to nominate figures who are unlikely to prove controversial to Senators. For that reason, the Senate's confirmation of Presidential appointments effectively acts as a check on the President's power. Although there are effective checks on presidential power, some are undermined by a number of loopholes which the President benefits from, especially in regard to foreign affairs. However, there is a wide consensus that the President faces more checks on his authority within domestic affairs, such as judicial reviews and Congress' power of the purse. Therefore, the allegation that there are no effective checks on Presidential power is false. ...read more.