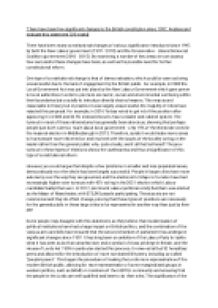 There have been few significant changes to the British constitution since 1997. Analyse and evaluate this statement.

Ã¯Â»Â¿â€˜There have been few significant changes to the British constitution since 1997.â€™ Analyse and evaluate this statement. [25 marks] There have been many constitutional changes of various significance introduced since 1997, by both the New Labour government (1997 - 2010) and the Conservative - Liberal Democrat Coalition government (2010 - 2015). By examining a number of key areas we can assess how successful these changes have been, as well as the possible need for further constitutional reform. One type of constitutional change is that of democratisation, which could be seen as being unsuccessful due to the lack of engagement by the British public. For example, in 2000 the Local Government Act was put into place by the New Labour Government which gave power to local authorities in order to promote economic, social and environmental well being within their boundaries but crucially to introduce directly elected mayors. ...read more.

The poor turnout in these types of elections shows the uselessness and thus insignificance of this type of constitutional reform. However, you could argue that despite a few problems in smaller and less populated areas, democratisation on the whole has been largely successful. People in larger cities have more autonomy over the way they are governed, and the elections for Mayor of London have had increasingly higher voter turnouts with 42% voting in the 2021 election which Labour candidate Sadiq Khan won. In 2017, prominent Labour politician Andy Burnham was elected as the Mayor of Manchester, with 573,543 people participating. These posts are not ceremonial and they do effect change, proving that these types of positions are necessary for the general public in these large cities to be represented in another way than just by their MP. ...read more.

The significance of the process of modernisation to one of the most integral parts of parliament should not be understated, and clearly shows the importance of having an unentrenched constitution to make changes to. In conclusion, I disagree with this statement as I believe that there have been many significant changes to the British constitution since 1997, not just the ones aforementioned but also including the establishment of devolved legislative bodies in constituent countries of the UK (also known as devolution) and the gradual introduction of more human rights legislation. However, I do think that there is further constitutional reform needed such as introducing an elected component to the House of Lords as despite the changes made, the makeup of the second chamber still does not reflect the social and demographic diversity of the UK, and there is a distinct under representation of ethnic minorities, women, and young people. ...read more.