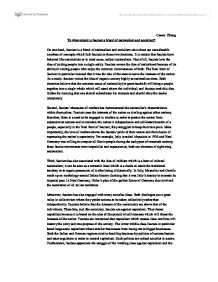 To what extend is fascism a blend of nationalism and socialism?

Cassie Zhang To what extend is fascism a blend of nationalism and socialism? On one hand, fascism is a blend of nationalism and socialism since there are considerable numbers of concepts which link fascism to those two doctrines. It is certain that fascists have behaved like nationalists or in most cases, radical nationalists. First of all, fascists love the idea of uniting people into a single entity. Fascists revere the idea of nationhood because of its ability of uniting people who enjoy the common circumstances of birth. The n**i form of fascism in particular insisted that it was the role of the state to serve the interests of the nation. As a result, fascism values the idea of organic society highly as nationalism does. Both doctrines believe that the common sense of nationality (or gemeinschaft) will bring a people together into a single whole which will stand above the individual; and fascists took this idea further by claiming that one should subordinate his interests and should obey the leader completely. ...read more.

In n**i Germany, Hitler's plan of the golden future of Germany also involved the restoration of all its lost territories Moreover, fascism has also engaged with many socialist ideas. Both ideologies see a great value in collectivism where they prefer actions to be taken collectively rather than independently. Fascists believe that the interests of the community are above that of the individuals. Therefore, just like socialism, fascists are against capitalism. They detest capitalism because it is based on the idea of the pursuit of self-interests which will threat the interests of the nation. Fascists are concerned that capitalism which creates class conflicts will destroy the unity and true purpose of the society. The lower middle-class fascists in particular hated large-scale capitalism where smaller businesses were losing out to bigger businesses. Both the Italian and German regimes tried to bend big business by policies of nationalization and state regulation in order to control capitalism. Such policies are indeed socialist in nature. Furthermore, fascists appreciate the struggle of the working class against capitalism and the poor physical working conditions. ...read more.

Fascists believe the strongest person should naturally dominate and they see socialists' attempts of making people equal when they are not will prevent the natural progress of the society. Moreover, fascism is against democracy because they believe it is only the expression of dominant self-interest and the rule of majority is not necessarily right. Fascists stress the idea that only the dynamic leader understands the general will of the people and will lead the nation to its bright future whereas pluralist and liberal democracy would create a weak and directionless society. These ideas are neither presented in nationalism and socialism. They are distinctive to fascism. It has become obvious that there are more links between fascism and nationalism than there are between fascism and socialism. In fact, fascism and socialism conflict with each other in many ways such as the idea over equality; whereas all the fascists could be said to be nationalists since they emphasize on the interests and superiority of nation and importance of unity. Therefore, fascism is not merely a blend of nationalism and socialism, it is a different ideology from those two doctrines but there remains close relations with nationalism. ...read more.