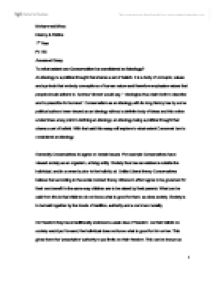 To what extent can Conservatism be considered an ideology?

Mohammed Mirza History & Politics 1st Year PL103 Assessed Essay To what extent can Conservatism be considered an ideology? An ideology is a political thought that shares a set of beliefs. It is a body of concepts, values and symbols that embody conceptions of human nature and therefore emphasise values that people should adhere to. Andrew Vincent would say, " Ideologies thus claim both to describe and to prescribe for humans". Conservatism as an ideology with its long history has by some political authors been viewed as an ideology without a definite body of ideas and this notion undermines a key point in defining an ideology: an ideology being a political thought that shares a set of beliefs. With that said this essay will explore to what extent Conservatism is considered an ideology. Generally Conservatives do agree on certain issues. For example Conservatives have viewed society as an organism, a living entity. Society thus has an existence outside the individual, and in a sense is prior to the individual. Unlike Liberal theory Conservatives believe that according to the social contract theory citizens in affect agree to be governed for their own benefit in the same way children are to be raised by their parents. ...read more.

Therefore they sought to overcome the social divisions by improving conditions and bringing about improvements. Furthermore, they believed in a Paternalistic Government acting in a collectivist way. They would have a limited role in the economy and would emphasise strong authority. This Conservatism emphasises a strong state that should as a paternalistic government provide society with benefits. Liberal Conservatism, which emerged around the 1830's under Robert Peel, believed in free trade, limited authority and more individualism rather than social obligations. In addition they believed in very little role in the economy. Comparing Liberal Conservatism with One Party Conservatism it is clear that Conservatives do not believe in or share a fixed set of beliefs in many issues. This can be concluded further looking at the New Right. The New Right emerged in Post war years focusing on its aims of privatisation and the rolling back of the state. Adding to this the New Right believes in defence of family values, defence of the nation's sovereignty wary and fearful over immigration. Having explored some of the factions of conservatism it is even more clear that the set of beliefs that distinguish conservatism are rather weak and to make a fair comment undermine Conservatism as being an ideology. ...read more.

Communism too can be viewed in the same way. The communism that was in the USSR was not exactly the same as it was in China. The fact is China accused the USSR during the 1960's as being reformist rather than Marxist. During the period Khrushchev the leader at the time was carrying out a policy of decentralisation something that most Marxists do not adhere to. At present China one of the few Communist countries left in the world has taken a less concrete approach on her beliefs. The government has opened up trade centres and the market is becoming less controlled with foreign companies opening up factories in China such as Sony to take advantage of the lower labour costs. In addition China is now a member of the World Trade Organisation something that is not envisaged with Communism. With that said ideologies do not appear to be as fixed or hard as concrete in their beliefs. Conservatism may be less so but it does exist as an ideology. It can be confused with other ideologies but the conservatism we know is the conservatism that takes in free market thinking with paternalistic government. It does to an extent have a set of beliefs and that as the Conservative motto in the UK state: 'The Country at any given moment'. ...read more.