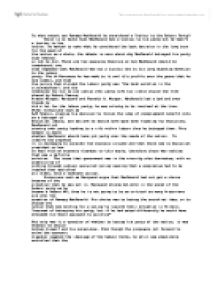 To what extent can Ramsay MacDonald be considered a Traitor to the Labour Party?

To what extent can Ramsay MacDonald be considered a Traitor to the Labour Party? There is no doubt that MacDonald was a traitor to his party but he wasn't a traitor to the nation. He wanted to make what he considered the best decision in the long term for the good of the nation as a whole, the debate is more about why MacDonald betrayed his party than whether or not he did. There are two opposing theories on how MacDonald should be remembered, one that suggests that MacDonald was not a traitor due to his long standing devotion to the labour party. The differences he has made to it and it's profile over the years that he was leader, and that the policy that divided the labour party was 'the best solution in the circumstances', and the necessity for him to put nation over party left him little choice the view shared by Robert Pearce, Austen Morgan, Marquand and Kenneth O. Morgan. MacDonald had a bad end even though he did a lot for the labour party, he was unlucky to be involved at the time. Other historians such as AJP Taylor, dismiss his decision to follow the idea of unemployment benefit cuts as a betrayal of Socialist ideals, and believe he should have gone down fighting for Socialism, MacDonald put country over party leading to a rift within labour thus he betrayed them. ...read more.

They felt that if the policy of unemployment benefit was necessary then it should be introduced by other parties, otherwise they would be betraying 'their people', the unemployed. The labour party didn't want to put their name to a policy that went against the people that they were representing. In their eyes he should not do anything to harm the base of their party even if it means loosing office. They were the people who supported them in the election so they shouldn't be the ones burdened when trying to save the economy. If Labour did make cuts in Unemployment benefit it would mean that the Trade Unions would also stop supporting labour, something that MacDonald had wanted from sometime. "His decision to make the Labour Party a national rather than a Trade Union or class party" MacDonald had made it common knowledge in the past that he wanted Labour to become independent from the trades unions allowing them to follow policy that they believed was in their interests and not that of the unions. The issue that is prompted by this argument, is that if MacDonald had had an ulterior motive he gained little from the outcome, "If indeed he betrayed the labour party, his rewards were singularly few" Written by AJP Taylor in his book, "British Prime Ministers and other Essays", Taylor is likely to be critical of the Labour party in general due to his past involvement with them. ...read more.

nation and party, conscience and popularity, right and wrong in his mind, he chose the nation and to do the correct thing in his mind, thus betraying the party that he had devoted so much to. He was unlucky to be in the situation that he was in, he stood by what he believed was right and didn't give in. The rest of the Labour Party also saw that they could not resolve the problems of the country they were a relatively young party, and many had little experience in office. Although few believed that MacDonald was wrong in what he wanted it was on principle that the cabinet voted against him. Believing that if the Labour Party were to act, which they had to, they should go down fighting for socialism. Overall, MacDonald was a founder of the labour Party and thus cannot be considered as a traitor. He couldn't find an alternative and felt that the only opportunity that there was, was to implement the benefit cuts. He did betray the socialist ideas but he did what he felt he had to do therefore he was a traitor to the Labour party as a whole yet he was such an important factor in the success of the party that to some extent he can be forgiven for his judgement of the situation. ...read more.

3 Stars - This essay demonstrates strong command of the subject, wider reading and good critical vocabulary. A fair and appropriate conclusion is implicitly reached following ongoing evaluation throughout the essay.
The weaknesses in the essay are in it's structure and organisation - there is little evidence of a logical plan: points do not logically follow on from each other, there is considerable repetition of general points and at times it lapses into narrative above analysis. Also the layout of the essay is confusing and the footnotes are not applied to the main body of the piece. The essay would be clearer with a definition of key terms and setting of historical context, a paragraph on the extent to which MacDonald cannot be considered a traitor, the counter-argument and an evaluation of both sides before a conclusion is reached.