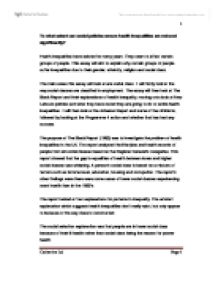 To what extent can social policies ensure health inequalities are reduced significantly?

To what extent can social policies ensure health inequalities are reduced significantly? Health inequalities have existed for many years. They seem to affect certain groups of people. This essay will aim to explain why certain groups of people suffer inequalities due to their gender, ethnicity, religion and social class. The main areas this essay will look at are social class. It will firstly look at the way social classes are classified in employment. The essay will then look at The Black Report and their explanations of health inequality, moving onto look at New Labours policies and what they have stated they are going to do to tackle health inequalities. It will then look at the Acheson Report and some of the criticisms, followed by looking at the Programme 4 action and whether that has had any success. The purpose of The Black Report (1980) was to investigate the problem of health inequalities in the UK. The report analysed the lifestyles and health records of people from all social classes based on the Registar General's categories. This report showed that the gap in equalities of health between lower and higher social classes was widening. A person's social class is based on a mixture of factors such as income level, education, housing and occupation. ...read more.

Their aim was to provide opportunities for those excluded rather than attempting to redistribute wealth to equalise society, they also set up the Acheson Report. Acheson Report (1998) was an independent study into health inequality which was commissioned by the New Labour government in 1997. It was a comprehensive survey of the disadvantaged. The findings mirrored those of the Black Report that the root cause of inequalities was poverty. The conclusion of the report was that the gap between richest and poorest had to be reduced. They found children from poor families weighed less than those from wealthy families. Infant mortality rates were higher in lower social classes and long term illness was higher in lower class men. It stated 2.2 million children live on income levels fifty per cent below the national average. The recommendations of the report were that to reduce health inequalities it needed to tackle the wider determinants. The most vulnerable needed improved benefits and they should concentrate on pre-school provision and nutrition in schools. He stated that further policies were needed focusing directly on the needs of certain groups such as families, the young and ethnic. He also said access to health services needed to be improved. ...read more.

New Labour is trying to narrow the gap of poorer health for the lower social class by trying to tackle poverty through Tax Credits, National Minimum Wage and New Deal. Though this is a step forward it does not appear to be enough especially with the credit crunch situation at the moment where people are being made redundant so there are even fewer jobs available. The government needs to imply more policies to ensure the gap of those on lower incomes are reduced. The National Minimum wage could be increased as it is relatively low compared to the national average. Working Tax Credits could also be increased making it more rewarding for parents to work rather than being on benefits. Another point is that instead of just looking at people's physical health the government could look at other aspects such as psychological, environmental, spiritual and emotional. These aspects play an important role on the overall health of an individual. Now we have looked at The Black Report, Acheson Report and Programme 4 Action it shows that all though the government, seem to be trying to reduce health inequalities there is still a long way to go. In order to improve the health of the lower social classes it needs to first improve their quality of life. ?? ?? ?? ?? 1 Catherine Lal Page 1 ...read more.