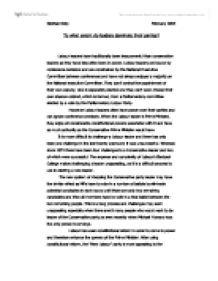 To what extent do leaders dominate their parties?

To what extent do leaders dominate their parties? Labour leaders have traditionally been less powerful than conservative leaders as they have less often been in power. Labour leaders are bound by conference decisions and are constrained by the National Executive Committee between conferences and have not always enjoyed a majority on the National executive Committee. They don't control the appointment of their own deputy; who is separately elected and they can't even choose their own shadow cabinet, which is formed, from a Parliamentary committee elected by a vote by the Parliamentary Labour Party. However Labour leaders often have power over their parties and can ignore conference decisions. When the Labour leader is Prime Minister, they enjoy all considerable constitutional powers associated with it and have as much authority as the Conservative Prime Minister would have. It is more difficult to challenge a Labour leader and there has only been one challenge in the last twenty years and it was unsuccessful. Whereas since 1975 there have been four challenges to a Conservative leader and two of which were successful. The expense and complexity of Labour's Electoral College makes challenging a leader unappealing, as it is a difficult process to use in electing a new leader. ...read more.

Because rebellions have little effect on Blair due to his, majority, he can dominate his party because MPs know they will have little effect if they do rebel. When the Major government was in power, we could see that major had less dominance over his party as he had more pressure to please his MPs because rebellions would affect him worse than they would Blair. Leaders can dominate their party with the use of party whips, who maintain discipline through threats and bribes. This dissuades MPs from rebellions as they risk losing job perks. In some cases backbench MPs have a say over leadership as the leader can tend to change policy to prevent rebellions for example when Wilson backed down from Trade Union reform because the chief whip had said he couldn't get it through the parliamentary party. Conferences have some effect on the power of the leadership as the leader's decisions can be affected by the strong expressions of opinion that can influence them e.g. Conservative leader persuaded to introduce Poll tax immediately rather that phase it in gradually. ...read more.

Due to the increase in internal democracy through allowing ordinary members to have a say in thing, it seems that the leaders have become less dominant of their parties but however; this "Plebiscitary democracy" has actually increased the dominance of the leader as it is likely that the ordinary members are more likely to support the leader than activists due to media focus presenting leaders in an attractive way for example Tony Blair viewed as a Christian family man. Dominance can be dominated by external factors like publicity and electoral success, as with little public support, leaders are unlikely to maintain full party support, as they seem less valuable. Overall, the Conservative leaders have more dominance over their parties than Labour leaders as they have dominance over important areas like policy making even though they seen to have less mandate as they can emerge without proper support from party members and can be challenge more easily. There is an existence of Oligarchy in the current system but the leaders still have to ensure that they please a certain number of people in order to retain their dominant role e.g. Thatcher who had a large amount of member support but was challenged by other MPs and was successfully removed from power; losing her role altogether. Siobhan Kiely February 2004 ...read more.