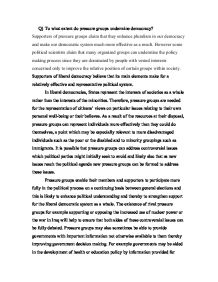 Supporters of pressure groups claim that they enhance pluralism in our democracy and make our democratic system much more effective as a result. However some political scientists claim that many organized groups can undermine the policy making process since they are dominated by people with vested interests concerned only to improve the relative position of certain groups within society. Supporters of liberal democracy believe that its main elements make for a relatively effective and representative political system.

In liberal democracies, States represent the interests of societies as a whole rather than the interests of the minorities. Therefore, pressure groups are needed for the representation of citizens’ views on particular issues relating to their own personal well-being or their believes. As a result of the resources at their disposal, pressure groups can represent individuals more effectively than they could do themselves, a point which may be especially relevant to more disadvantaged individuals such as the poor or the disabled and to minority groupings such as immigrants. It is possible that pressure groups can address controversial issues which political parties might initially seek to avoid and likely also that as new issues reach the political agenda new pressure groups can be formed to address these issues.

Pressure groups enable their members and supporters to participate more fully in the political process on a continuing basis between general elections and this is likely to enhance political understanding and thereby to strengthen support for the liberal democratic system as a whole. The existence of rival pressure groups for example supporting or opposing the increased use of nuclear power or the war in Iraq will help to ensure that both sides of these controversial issues can be fully debated. Pressure groups may also sometimes be able to provide governments with important information not otherwise available to them thereby improving government decision making. For example governments may be aided in the development of health or education policy by information provided for example by the Royal College of Nursing, the British Medical Association and the various teaching unions.

However it has also been argued by more critical analysts that pressure group activity may in some cases undermine in various respects the principles of liberal democracy. Many claim that liberal democratic governments favor disproportionately the interests of well funded, well organized pro-capitalist pressure groups because governments depend for their very survival on the profitability and efficiency of private capitalism on which in turn levels of employment, living standards and economic growth depend. Governments are therefore unlikely to introduce policies which are not supported by private enterprise. Furthermore pro-capitalist pressure groups are likely to be granted insider status which means that their negotiations with government are often secret which undermines both their own and the government’s accountability to the general public. These points taken together do suggest that the poor and otherwise disadvantaged groups such as many disabled people and members of some ethnic minority groups are themselves relatively unlikely to be involved directly in pressure group activity and relatively more likely to be represented by under-funded outsider pressure groups which despite their best efforts may be unable to greatly influence government. Indeed it has also been argued that the existence of so many pressure groups persuades people to believe that they have influence when in fact they have very little.

It has been suggested that from the 1940s to the 1970s national political decision making operated within a framework of so-called corporatism in which government decisions were influenced much more by business and trade union leaders than by the leaders of other pressure groups. Critics of corporatism have argued that it gave excessive political powers to business and trade union leaders who had not necessarily been fairly elected; that business and trade union leaders did not necessarily have the interests of the country at heart; that they each possessed considerable veto power enabling them to force governments to accept particular policies rather than facing ,say, a prolonged strike or reduced private sector investment; and that the excessive power of these groups undermined the pluralist claim that power was distributed among many separate pressure groups.

From the 1970s theorists influenced by New Right ideology accepted the above criticisms of corporatism. They argued in particular that the trade unions had excessive powers which they used to weaken the economy via damaging restrictive practices, inflationary wage demands and strikes and that welfare oriented pressure groups such as Shelter and the Child Poverty Action Group raised unrealistic expectations of increased spending on the welfare state which when they were not met served only to undermine confidence in government. Fewer criticisms were made of the activities of private industry although there were sometimes significant disagreements over economic policy.

We may conclude that theorists influenced by democratic pluralism have been most likely to praise the democratic activities of pressure groups but that theorists influenced by Marxism, Elitism, Corporatism and the New Right have adopted a more critical approach. While recognizing the importance of these criticisms one only has to imagine a political system with no independent pressure groups to see that they do on balance make a significant contribution to the operation of liberal democracy.