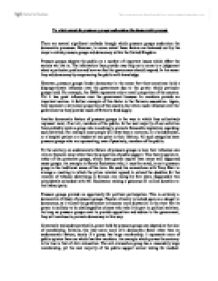 To what extent do pressure groups undermine the democratic process

To what extent do pressure groups undermine the democratic process There are several significant methods through which pressure groups undermine the democratic processes. However, to some extent these factors are balanced out by the ways in which pressure groups aid democracy within the United Kingdom. Pressure groups educate the public on a number of important issues which affect the society we live in. The information they provide may help us to come to a judgement about a particular problem and how we feel the government should respond. In this sense they aid democracy by empowering the public with knowledge. However, pressure groups hinder democracy in the sense that they sometimes hold a disproportionate influence over the government due to the power which particular groups hold. For example, the BMA represents only a small proportion of the country. Yet it has great influence over the government because its members provide an important service. ...read more.

He used his connections with Tony Blair to arrange a meeting in which the prime minister agreed to extend the deadline for the removal of tobacco advertising in formula one racing by five years. Supposedly this coincidently coincided with Mr. Ecclestone making a generous �1 million donation to the Labour party. Pressure groups provide an opportunity for political participation. This is certainly a democratic attribute of pressure groups. Passive citizenry is looked upon as a danger to democracy, as it allows the government to become more dictatorial in the view that its power is unlikely to be challenged by citizens who take little part in political activism. As long as pressure groups exist to provide opposition and advice to the government, they will continue to promote democracy in this way. Conversely and undemocratically, power held by pressure groups can depend on the size of membership. Initially, this may seem more of a democratic factor rather than an undemocratic feature; surely if a group has large membership it represents more of public opinion than one which has few members. ...read more.

This way your views as a citizen are still having a small but significant impact despite not being able to vote. An example, is the group Forest who opposed the bill banning smoking in public places, all be it unsuccessfully. On the other hand, abrupt waves of public emotion can propel a topic into the limelight, perhaps without rational reason. This obviously obstructs democracy rather than promoting it. An example is the Snowdrop campaign, which was successful in lobbying the government into banning citizens keeping hand guns. However, the group was only successful following the fallout of the Dunblane school massacre. Resultantly, the legislation was rushed and poorly written and therefore has done little to reduce gun crime. In conclusion, I believe there are several ways in which pressure groups undermine democracy. However, I agree with the pluralist view that allowing a wide range of beliefs and ideologies to flourish promotes democracy, mainly by educating the public into making informed judgements. ...read more.