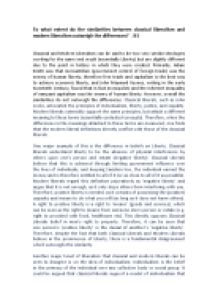 ﻿To what extent do the similarities between classical liberalism and modern liberalism outweigh the differences? /45 Classical and Modern Liberalism can be said to be two very similar ideologies working for the same end result (essentially Liberty) but are slightly different due to the point in history in which they were created. Primarily, Adam Smith saw that mercantilism (government control of foreign trade) was the enemy of human liberty, therefore free trade and capitalism is the best way to achieve economic liberty, and John Maynard Keynes, writing in the early twentieth Century, found that in fact monopolies and the inherent inequality of rampant capitalism was the enemy of human liberty. However, overall the similarities do not outweigh the differences. Classical liberals, such as John Locke, advocated the principles of individualism, liberty, justice, and equality. Modern liberals ostensibly support the same principles, but attach a different meaning to these terms (essentially contested concepts). Therefore, when the differences in the meanings attached to these terms are measured, one finds that the modern liberal definitions directly conflict with those of the classical liberals. ...read more.

This directly opposes Classical Liberals belief in man?s right to property. Therefore, it can be seen that one person?s ?positive liberty? is the denial of another?s ?negative liberty?. Therefore, despite the fact that both Classical Liberals and Modern Liberals believe in the prominence of Liberty, there is a fundamental disagreement which outweighs the similarity. Another major tenet of liberalism that classical and modern liberals can be seen to disagree is on the idea of individualism. Individualism is the belief in the primacy of the individual over any collective body or social group. It could be argued that classical liberals support a model of individualism that includes egotistical, market individualism, which emphasises self-interest and self-reliance. This is seen as allowing humans to flourish and to profit from their own talents and hard work, realising their individual potential. Classical liberals believe that this can be achieved through ?rolling back the state?, with a hope that it will increase individual freedom and strengthen individual responsibility. ...read more.

However, classical Liberals and modern liberals have similar views on a number of aspects of liberalism. Both believe in the importance of religious toleration; individuals and the state must respect the individual?s right to worship as one pleases. This implies a separation of church and state, as there cannot be one state approved religion. They also agree on the importance of popular sovereignty and consent; government should be ruled by the people rather than by a monarch, a religious figure, or some other elite. Government?s legitimacy rests on the consent of the governed. Overall, it is true that classical liberalism and modern liberalism are both part of the same ideology, they both support ideas such as individual rights, the importance of individualism and the prominence of liberty, however they have slightly different ideas as to the best way to achieve liberty and protect the individual. However, the fact that they have totally different positions on the standing of the state means that the differences outweigh the similarities. ...read more.