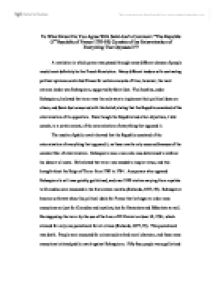 To what extent do you agree with Saint-Just's comment - &quot;The Republic (1st Republic of France 1792-95) consists of the extermination of everything that opposes it&quot;?

Thus, one can easily see that the Republic consisted of the extermination of all that opposed it. Foreign wars with countries that opposed the Republic through the use of the Committee of Public Safety and conscription further proved that the Republic consisted of only the extermination of everything that opposed it. When Louis XVI was executed on accounts of treason, England, Holland and Spain declared war on France, creating a foreign war issue (Haskins, 1971, 75). The Girondins were not able to achieve victories in these foreign wars, giving the Jacobins an excuse to take over. The Jacobins were determined to spread their political ideas out to all other European nations and exterminate all foreign countries who opposed these ideas. To carry out this task, Robespierre prompted the Committee of Public Safety to introduce conscription (Maximilien Robespierre and the Committee of Public Safety, http://www.age-of-the-sage.org/robespierre.html, November 17, 2002). The massive army of conscripts that France now had was the reason for France's victories in foreign wars, and the only intent of the Republic to institute conscription was so that all opposing foreign countries would be exterminated. ...read more.

Thus, the Republic did interfere with the governments of other nations and did not remain friends and natural allies of these nations. Despite its actions, the intent of the Republic definitely disagreed with Saint-Just's quotation, as can be seen from the Constitution of 1793, therefore, the Republic did not consist of only the extermination of all that opposed it, but also of democratic ideas and thoughts of peace and equality. The Republic consisted of the extermination of everything that opposed it only to a certain extent, as it did have other objectives. This can be proven with many examples, however, the three above arguments agreeing and disagreeing with Saint-Just's comment are the most influential. Public revolt and foreign wars are two arguments that can justify Saint-Just's quotation very well, however, one must realize that the Republic also consisted of the Constitution of 1793. Taking all of this into account, Saint-Just's statement is not a completely accurate account of the Republic as it is true only to a certain extent, however, it does describe the violent actions taken by the Republic at that time. ...read more.