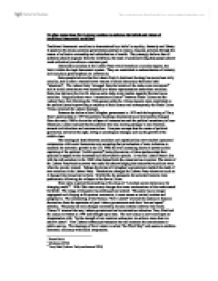 To what extent does New Labour continue to embrace the beliefs and values of traditional democratic socialists?

To what extent does New Labour continue to embrace the beliefs and values of traditional democratic socialists? Traditional democratic socialism is characterised by a belief in equality, fraternity and liberty. In practice this means socialist governments attempt to create a classless societies through the means of collective ownership and redistribution of wealth. They strongly believe that all authority should originate from the workforce, the heart of socialism being that people should work collectively to achieve a common goal. Democratic socialists in the Labour Party would introduce a socialist regime, but limit it within the legal democratic system. They are committed to nationalisation of industry and also place great emphasis on community. Some people believe that the Labour Party's dominant ideology has never been truly socialist, and is more a watered down version of social democracy that some label "labourism". The Labour Party "emerged from the bowels of the trade union movement"1 and its initial commitment was essentially to labour representation rather than socialism. Some ties between the two did exist as some trade union leaders regarded themselves as socialists. Originally there was a "contentious alliance"2 between Trade Unions and the Labour Party, but following the 1926 general strike the Unions became more committed to the political party by providing a majority of their finance and subsequently the Trade Union Values coloured the Labour ideology. ...read more.

past the Third Way seems to be dedicated to creating a level playing field and positively discriminating in order to aid those who need it. Some say that New Labours plans for public private partnership expose them as right wing. However New Labour does not believe that the welfare state must end, or be slimmed down in anyway to act as a safety net to catch the most disadvantaged. New Labour are still dedicated to the NHS, and the 2001 budget revealed their plans to pour money back into the system that became starved during the Thatcher government. Tony Giddens believes that at the heart of the Third Way is the concept of no rights without responsibilities. Their dedication to improving schools is balanced by the harsher punishments for parents that do not ensure their children to go to school. There is lots of evidence of this dominant initiative- asking parents to ensure time is put into homework, cracking down on teenage fathers, ensuring teenage mothers are prepared for their responsibilities and requiring jobseekers to attend interviews under the single gateway to welfare. The Third Way's strong moral vein comes from Blair's own beliefs and Christian Socialism. ...read more.

Some even suggest the One Nation Tories and New Labour supporters are ideological clones. It is easy to suggest that Tony Blair's "New Labour" and his "Third Way" combine to form a watered down version of Thatcherism with a modern more glamorised media friendly image. His presidential style of governing the country is similar to Margaret Thatcher's and his position on privatisation of companies is a fundamental conservative belief, and far right from the "old labour" socialists. A generation ago half this country was working class and 20% was middle class. Today they are the other way round. Labour had to adapt if it wanted to regain power. No Labour leader could have come into power and attempted to undo all of Margaret Thatcher's changes. The Third Way seeks to respond to the twenty first century and apply "left of centre values to the new world"5. New Labour recognises the need for a moral framework and to adjust public institutions to a very different and demanding environment. Tony Blair describes his ideology as "social-ism"6 and as an inevitable development from the Democratic Socialist party of the past 1 Ernest Bevin 2 Minksina (1992) 3 Tony Blair (Labour Party conference 1994) 4 The Italian thinker Norberto Bobbio 5 Giddens 6 Labour Conference Speech 1994 ...read more.