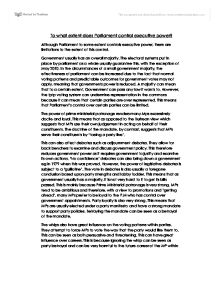 To what extent does Parliament control executive power?

To what extent does Parliament control executive power? Although Parliament to some extent controls executive power, there are limitations to the extent of this control. Government usually has an overall majority. The electoral systems put in place by parliament as a whole usually guarantee this, with the exception of May 2010. In the circumstances of a small government majority, the effectiveness of parliament can be increased due to the fact that normal voting patterns and predictable outcomes for government votes may not apply, meaning that governments power is reduced. A majority can mean that to a certain extent, Government can pass any law it wants to. However, the fptp voting system can undermine representation in the commons because it can mean that certain parties are over represented. This means that Parliament's control over certain parties can be limited. The power of prime ministerial patronage renders many Mps excessively docile and loyal. This means that as opposed to the Burkean view which suggests that MPs use their own judgement in acting on behalf of their constituents. The doctrine of the mandate, by contrast, suggests that MPs serve their constituents by 'toeing a party line'. ...read more.

They attempt to force MPs to vote the way that the party would like them to. This can be seen as both persuasive and threatening. This can have great influence over careers. This is because ignoring the whip can be seen as party betrayal and can be very harmful to the future career of the MP within the party, depending on the severity of the whip which has been ignored. In extreme circumstances, this can lead to suspension from the party or can persuade a party to 'de-select' them. The whips therefore reduce the power of parliament because the votes, again, can be fairly predictable and a majority government's preferred outcome often occurs when back bench rebellion does not occur. MPs can often lack research back up, expertise and political support. This has been exaggerated in recent years with an increasing number of MPs and politicians following politics as their only career. In previous years, it has been more common for MPs to have other careers (usually within Law and Business), this would mean that their expertise would be greater. ...read more.

They also cut across party lines which means they can be said to be independent. They report their findings and recommendations back to the commons. In recent years they have begun to assert themselves more strongly. Eg select committees produced a critical report on the privatisation of air traffic control in 2000. The government usually acts on their recommendations. However, the committees do not also have a great amount of time in which to operate. They can also lack the expertise, resources, staff, power and often the will to be more than an irritant to the government. The House of Lords, despite its lack of democratic legitimacy, has effectively blocked amended legislation when it saw fit. This means that parliamentary power is increased. The balance of power between government and parliament is variable in that a government majority can increase government power but a small majority can increase parliament power. The executive government does however act in an environment when it is constantly under scrutiny and constraints. The strength of these depends on the context of the situation. Simply, the government cannot do what it wants without the approval of parliament which means that effectively, parliament holds power and remains the central institution of the Great British political system. ...read more.

4 Stars - The strengths of this essay lie in its competent command and explanation of the subject matter and the precise, analytical conclusion.
Where the essay could be improved is with a more coherent structure - points are not effectively grouped together, consequently the essay 'jumps around' and revisits earlier themes in a confusing way. In places points would be strengthened with a greater use of concrete examples.