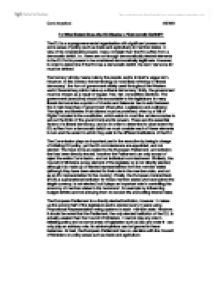 To What Extent Does the EU Display a 'Democratic Deficit'?

To What Extent Does the EU Display a 'Democratic Deficit'? The EU is a supragovernmental organisation with significant powers over some areas of policy (such as trade and agriculture) in member states. In view of its considerable powers, many complain that the EU suffers from a democratic deficit, i.e., there are not enough democratically elected elements to the EU for its powers to be considered democratically legitimate. However, in order to determine if the EU has a democratic deficit, the term 'democratic' must be defined. 'Democracy' simply means rule by the people, and is in itself a vague term. However, in this context, the terminology is most likely referring to 'liberal democracy', the form of government widely used throughout the Western world. Several key points make up a liberal democracy; firstly, the government must be chosen as a result of regular, free, fair, competitive elections. The government (executive) should be accountable to the legislature; in many liberal democracies a system of checks and balances has to exist between the 3 main branches of government (Executive, Legislature and Judiciary). The rights and liberties of all citizens must be protected, often by a 'Bill of Rights' included in the constitution, which exists in most liberal democracies to set out the limits of the government and its powers. These are the essential factors of a liberal democracy, and so in order to determine to what extent the EU suffers from a democratic deficit we must consider each of these elements in turn and the extent to which they exist in the different institutions of the EU. ...read more.

This vacuum of press coverage of the European Parliament is a serious blow to its accountability, because scrutiny of the press and therefore the public is a key part of accountability in a liberal democracy. The Council of Ministers, the second part of the legislature also has a problem with accountability because the parliaments of member states have no control over the actions of government ministers within the EU. In many liberal democracies, a system of checks and balances is used to keep control of the 3 main branches of government, and ensure that one doesn't become too powerful. The Commission, which makes up part of the executive of the EU, is held to account by the European Parliament because the EP can dismiss the entire Commission. For example in 1999 this almost happened to the Commission headed by Santer, due to corruption charges. In the end however, the Commission all resigned before they could be called to account by the European Parliament. However, there is a weakness to this power because the EP can only dismiss the entire Commission, and not individual Commissioners. The lack of transparency in the EU institutions is a key problem for those who wish to call the EU a truly democratic institution, because accountability cannot exist without the transparency needed to scrutinise the actions of the EU. For example, meetings of the Council of Ministers, the more powerful arm of the legislature are not open to the public, although minutes are published. ...read more.

The constitution seeks to codify existing Treaties, as well as set out clearer guidelines for members to join and leave. Another of its aims is to make the EU more transparent and open to scrutiny, and therefore closer to fulfilling the ideal of accountability. From the outset it would seem that the EU has a severe democratic deficit; there would appear to be a severe lack of transparency and accountability within the Commission and European Central Bank, unclear lines of political authority and a weak parliament with no clear mandate to rule. However, on closer inspection, it can be seen that the situation isn't as bad as it would appear, with various checks already in place to ensure some degree of liberal democratic ideals are upheld. The future looks bright for the EU as well, with a new Constitution bringing in a more defined structure and even a Charter of Fundamental Rights, two huge steps towards a more democratic structure. Further steps have been suggested to reduce the democratic deficit within the EU. For example, some people feel that giving the European Parliament more powers through making all issues co-decision with the Council of Ministers will reduce the deficit. Indeed, an increasing number of issues are now decided using co-decision, showing a movement towards this. Other suggestions include changing the party list voting system to a less party dominated system such as Single Transferable Vote as used in Northern Ireland. In the distant future some people would like to see more of the EU institutions being directly elected, although many of the national governments are opposed to this suggestion, so it seems unlikely for the foreseeable future. ?? ?? ?? ?? Carrie Raynham 5/8/2007 ...read more.