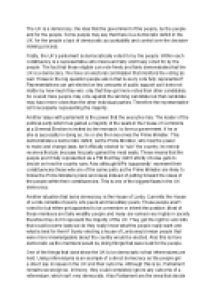 To what extent does the UK have a democratic deficit?

﻿The UK is a democracy, the idea that the government of the people, by the people and for the people. Some people may say that there is a democratic deficit in the UK, for the people a lack of democratic accountability and control over the decision-making process. Firstly, the UK?s parliament is democratically voted for by the people. Within each constituency is a representative who has been fairly and freely voted for by the people. The fact that those eligible can vote freely and fairly demonstrates that the UK is a democracy. We have an electoral commission that monitors the voting as well. However the big question people ask is that is every vote fully represented? Representatives can get elected on tiny amounts of public support as it does not matter by how much they win, only that they get more votes than other candidates. ...read more.

This is one of the biggest flaws in the UK democracy. Another situation that lacks democracy is the House of Lords. Currently the House of Lords consists of peers; Life peers and hereditary peers. These people aren't voted for but either get appointed to be a member or inherit the position. Most of these members are fairly wealthy people and many are ranked very highly in society therefore they don?t represent the majority of the UK. They get the right to veto bills that could become laws but do they really know what the people really want and what is best for them? Surely electing a house of Lords would mean people that were more knowledgeable about the country would be elected. Also this is more democratic as the members would be doing things that were best for the people. One of the things that does show the UK to be democratic is that referendums are held. ...read more.

Overall, I think that the UK is fairly democratic, however the people lack representation within Parliament. Everyone can form their own political ideas and vote, however it?s whether these political ideas and their votes are ever really represented in parliament. The worry is, is that Parliament is sovereign and make big decisions on the UK and it?s laws, however it could be that a majority of the UK don?t have a representative there that they want to represent them as they don?t agree with their political views. A democracy is a form of government in which supreme power is vested in the people. Yes people use their power to vote etc. but Parliament is sovereign so in theory could make/change any laws they wanted and not think about the peoples wants/needs. However because of the nature of our democracy the people would be unlikely to vote again for their ?representative?. ...read more.