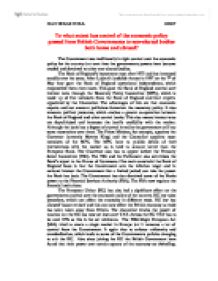 To what extent has control of the economic policy passed from British Governments to non-elected bodies both home and abroad?

To what extent has control of the economic policy passed from British Governments to non-elected bodies both home and abroad? The Government was traditionally in tight control over the economic policy for the country but over time the governments powers have become eroded and devolved to other non-elected bodies. The Bank of England's importance rose after 1975 and has increased steadily over the years. After Labour's landslide victory in 1997 on the 7th of May they gave the Bank of England operational independence, which empowered them even more. This gave the Bank of England control over interest rates through the Monetary Policy Committee (MPC), which is made up of five members from the Bank of England and four experts appointed by the Chancellor. The advantages of this are that economic experts and not amateur politicians formulate the monetary policy. It also removes political pressures, which enables a greater co-operation between the Bank of England and other central banks. This also means interest rates are depoliticised and increases the bank's credibility with the market. ...read more.

The chancellor retains the power of taxation but the EU has now set laws over VAT. Across the EU VAT has to be over 15% as this is the set minimum. The 1986 Single European Act (SEA) tried to create a single market in Europe but it removes a lot of control from the Government. It again tries to enforce uniformity and standardisation, which leads to some of the Governments policies changing to suit the EU. Also since joining the EU the British Government have found that their power over certain aspects of the economy are dwindling. The Common Agricultural Policy (CAP) is a major part of the EU's spending, almost half of its total. It aims to help poorer farmers in Europe by giving them subsides and grants. It has also led to butter mountains and wine lakes. Although the British government pays into this fund the British farmers get a disproportional amount of aid. Many of the British farms are efficient and large and so they do not receive the amount of money they should due to other poorer farms in Europe receiving the money. ...read more.

The Government do have a say in EU law at regular meetings and debates where they can voice their opinion but if the law is passed they can do nothing about it. The Parliament still retains ultimate sovereignty as it can pull out of the EU but this seems more and more unlikely. In conclusion, the Government has suffered from a passing over of control to non-elected bodies such as the EU and the Bank of England but it does retain some constraints over both of these bodies. The Government does constrain the Bank of England through various means such as making them accountable to the Parliament and TSC. It also has to comply with the monetary policy framework that is drawn up by the Government. It also has power over the EU as the control of taxation and foreign policy, for example, is still in the hands of the government. Also Parliament can pull out of the EU whenever they wished to do so but it remains unlikely. This can be seen by Gordon Brown's 'Golden Rules' remaining within the EU's convergence criteria. This is the case as the government are keeping an open mind to joining the Euro and this makes leaving the EU incredibly unlikely. Danielle Hill 13KF ...read more.