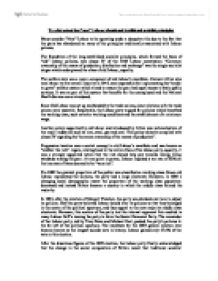 To what extent has &quot;new&quot; Labour abandoned traditional socialist principles

To what extent has "new" Labour abandoned traditional socialist principles Many consider "New" Labour to be operating under a deceptive title due to the fact that the party has abandoned so many of the principles traditionally associated with Labour policies. The foundation of the long-established socialist principles, which formed the basis of "old" Labour policies, was clause IV of the 1918 Labour constitution. "Common ownership of the means of production, distribution and exchange" was the single socialist slogan which underpinned the ethos of old Labour; equality. The welfare state was a major component of old Labour's manifesto. Clement Attlee who won labour its first overall majority in 1945, was responsible for implementing the "cradle to grave" welfare system which aimed to ensure the poor had equal access to basic public services. It was as part of this system that benefits for the unemployed and the National Health Service were introduced. ...read more.

Since old Labour represented the workers, the party had a large electorate. However, in 1980 a changing social demographic meant the proportion of the working class population decreased and instead Britain became a country in which the middle class formed the majority. In 1981, after the election of Margret Thatcher, the party was divided over how to adjust its policies. Half the party believed Labour should alter its policies so that they belonged in the centre of the political spectrum, and thus appeal to the new majority middle class electorate. However, this section of the party lost the internal argument this resulted in many Labour M.P's leaving the party to form the Social Democrat Party. The remainder of the Labour party, led by Tony Benn and Michael Foot, pushed the party's policies to the far left of the political spectrum. The manifesto for the 1983 general election later became known as the longest suicide note in history; Labour gained only 27.6% of the vote in this election. ...read more.

From the Liberal Democratic trail of thought, New Labour supports many constitutional reforms, such as devolution of power and reorganisation of the House of Lords. New Labour has already funded the new Scottish parliament and implemented other laws supported by the Liberal Democrats such as the Freedom of Information Act. One of the few policies which remains from traditional socialist principles of "old" Labour is the aim of social justice. New Labour defines this as helping the "excluded" by improving state education and increasing benefits for working families on low incomes. In conclusion, I believe that to a great extent Labour has abandoned traditional socialist principles, the most publicised example of this being Tony Blair's very poor relationship with the Trade Unions; the same organisations that initially formed and funded "old" Labour. However, the one major policy which remains intact is Labour's commitment to the welfare state, even if this involves partial privatisation of state services such as schools and hospitals. ...read more.

3 stars - This essay is structured to compare New Labour and 'Old' Labour and has a sense of evaluation - it also identifies the main characteristics of socialism, but it is too generalised and requires more specific examples. There are some inaccuracies that require careful checking.