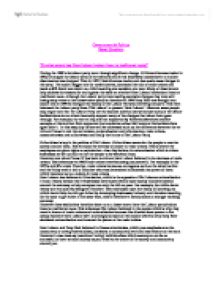 'To what extent has New Labour broken from its traditional roots?'

Government & Politics Essay Question 'To what extent has New Labour broken from its traditional roots?' During the 1980's the labour party went through significant change. N Kinnock became leader in 1983; he purged the labour party of the militants and in his leadership commitment to nuclear disarnments was dropped. Then in 1992 J Smith became leader and also made mass changes in the party. He made a bigger role for constituencies, decreased the role of trade unions and made a 40% block vote down to a third meaning one member, one vote. Many of these factors help address the reasons for and against the issue on whether New Labour has broken from its traditional roots. Although the Labour party were making extensive changes they were still losing many votes to the conservative party so therefore in 1994 Tony Blair was brought into power and in 1995 he changed the history of the Labour Party by rewriting Clause iv. This then reformed the Labour party from 'Old Labour' to present 'New Labour'. ...read more.

This was based upon the theory of lowering tax which would help the rich get richer by developing businesses, industry and therefore meaning for the poor to get richer at the same time, which therefore in theory means a stronger working economy. However these similarities therefore show us to a lesser extent have the Labour party broken from its traditional roots. This is because Old Labour believed in the people which is why they were in favour of trade unions and nationalisation because this allowed more power to the demos however New Labour isn't as strongly focused on the people which is why Tony Blair abolished nationalisation and lowered the power of the trade unions. New Labour and Tony Blair believed in Communitarianism, which puts emphasis onto the community or caring individualism, decisions at community level and less reliance on the state. However it also does say restrained 'caring' individualism which means you can be as successful or have as much money as you wish but be aware of the society and community around you. ...read more.

However I think this is proven by the fact that before clause IV was re-written by Tony Blair the labour party were going through immense downfall when votes were concerned so therefore this proves to us that Labour as a party has moved a long way as now being the reigning party since 1994. However I think that the main factor involved in deciding whether New Labour has broke away from its traditional roots is the Welfare State plight. Old Labour believe in increasing Welfare State, as a part of their socialist beliefs which is a complete contrast to New Labour who believe in decreasing the welfare state and trying to make employment levels rise. However although New Labour is currently claiming the highest amount of seats the future for the Labour party all depends on the chosen leader to stand, because if Gordon Brown is elected in the labour party will shift more left towards Old Labour. This explains to us that the only thing that's changed in the Labour party is Tony Blair, but in reality not all the Labour party has changed with Tony Blair to New Labour. For example. Many of the Labour Party did not support Blair for the Iraq war. By Jodie Tuley ...read more.