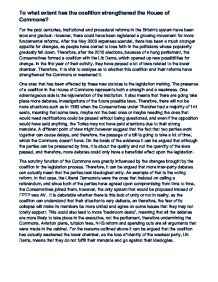 To what extent has the coalition strengthened the House of Commons?

To what extent has the coalition strengthened the House of Commons? For the past centuries, institutional and procedural reforms in the Britain's system have been slow and gradual. However, there could have been registered a growing movement for more fundamental reforms. After the May 2009 expenses scandal, there has been a much stronger appetite for changes, as people have started to lose faith in the politicians whose popularity gradually fell down. Therefore, after the 2010 elections, because of a hung parliament, the Conservatives formed a coalition with the Lib Dems, which opened up new possibilities for change. In the first year of their activity, they have passed a lot of laws related to the lower chamber. Therefore, it is vital to analyse as to whether this coalition and their reforms have strengthened the Commons or weakened it. One area that has been affected by these new statutes is the legislation making. The presence of a coalition in the House of Commons represents both a strength and a weakness. ...read more.

It is debatable whether there is this lack of unity or not in reality, as the coalition can understand that their situation is very delicate, an therefore, the fear of its collapse will make its members be more united and agree on some issues that they may not totally support. This could also lead to more "backroom deals", meaning that all the debates are more likely to take place in the executive, not the parliament, therefore undermining the Commons. Aviation plans, tuituion fees, NHS reform and spending cuts are all arguments that were made in the cabinet. For the reasons outlined above it can be argued that the coalition has actually weakened the lower chamber, as the loss of identity of the weakest party, Lib Dems, means that they do not fulfill their mandate and go against their ideologies. Alternatively, it can be argued that the representative function of the MPs only became more powerful. ...read more.

However, based on the evidence, it can be stated that the coalition has actually strengthened the government by making it more accountable. Overall, based on the evidence, it can be argued that the coalition has had beneficial effects on the commons as they have strengthened the debates stage as the Lib Dems are less likely to be as loyal and agree as fast as it has happened under the Thatcher and Blair governments. The scrutiny function was weakened in the way that 'backroom deals' undermine the real purpose of the lower chamber, and debates would take place in the executive and not the legislative. In comparison, the representative function was only improved under the Tories\Lib Dems coalition, the main reform of giving people the possibility to recall MPs is seen as a good statute, as after the expenses scandals, this was seen as things that could restore the constituent's faith. Therefore, by measuring on a scale the extent that the coalition strengthened the Commons, it can be argued that it has had a more positive impact rather than negative. ...read more.