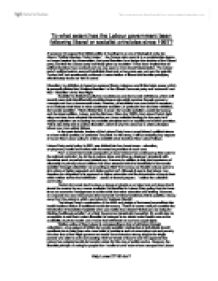 To what extent has the Labour government been following liberal or socialist principles since 1997?

To what extent has the Labour government been following liberal or socialist principles since 1997? At present, it is argued that British politics is heading for an era of ideological unity; Ian Adams 'Political Ideology Today' states '...the Conservative party is to a considerable degree no longer inspired by conservatism; that pure liberalism is no longer the doctrine of the Liberal party; and that the Labour party has finally given up socialism.' It has been implied that all political doctrines have evolved and are now open to more broad interpretation. The Labour party's political pattern seemed indefinitely fixed only a few years ago, yet now the typically 'Looney left' has questionably achieved a customisation of liberal and socialist principles, affectionately known as 'left of centre'. Liberalism, by definition, is based on personal liberty, tolerance and limited state power, which is generally divided into 'Welfare liberalism' of the Liberal Democrat party and 'economic' and Neo - liberalism of the New Right. Socialism is divided broadly into revolutionary and democratic definitions, which until recently were both identified with providing large-scale public services through economy management from a bureaucratic state. However, all socialists have now found it necessary to re-evaluate their ideas to what constitutes socialism, in particular from the latter definition, democratic socialism. ...read more.

Under liberalism, taxation curtails freedom as it prevents individuals spending their income as desired yet if large sections of the population experience extreme social and economic deprivation then it is necessary for state intervention. Rawls' theory of distributive justice attempts to supply the answer as social inequality can be justified as long as those benefiting most from capitalism do not make profits as a result of those in lower income capacity. For 2001, labour committed to reduce taxation levels for individuals but not at top levels and also for low-income levels, taxation was set at 10%. This is an attempt to gain socialist support as it does tie-in with their universal principles (both traditionally and social democracy) of equality of opportunity and of distributive justice. The Party even made a hazy perpetration to reducing the burden of taxation altogether, a cynic might say they wanted liberalist support. The party also reduced taxes on business and attempting to not look new right, especially for small companies. As a result of the acceptance of conservative spending plans in 1997 for the first two years of Labour government, Gordon Brown is now typically associated with 'economic prudence' maintaining control of inflation and only borrowing money for long term investment and is appreciated by business as the best chancellor this country has seen. ...read more.

It seems that fro every party policy made in 2001, slightly adapted from the cautious 1997 manifesto had an aspect of either doctrine but was contradictory in its endeavour to achieve this. It may be a harsh comparison to make, but during the third Reich the nationalist socialist party managed to have an aspect of their manifesto for every citizen in Germany. The Labour Party seems to have made a promise-to-promise nothing indefinitely. That is of course until that policy is a success or a failure. This government is proceeding with due care and attention to ensure that when the figures for policy successes are published they deceptively come out on top. It's only a matter of time before this cycle of government ends: it happened to Thatcher and with party resistance with the anti-war movement, its questionable as to how long the cabinet will obey. I thought it would be suitable to use clause IV as support for my conclusion instead of mentioning it in the body of the essay. In 1995, Clause IV was revised from the Labour party's 1918 constitution from a commitment to public ownership of industry to a broader statement of aims concerning social justice, equality of opportunity and reduced unemployment. The Labour Party clearly have the end result yet with no means in which to achieve it. Katy Lucas To what extent has the labour government been following liberal or socialist principles since 1997? ...read more.