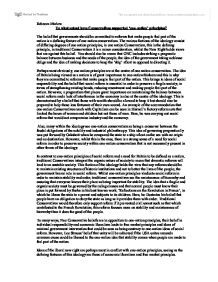 to what extent have conservatives supported one nation principles?

To what extent have Conservatives supported 'one-nation' principles? The belief that governments should be committed to reforms that make people feel part of the nation is a defining feature of one nation conservatism. The various factions of the ideology consist of differing degrees of one nation principles; in one nation Conservatism, this is the defining principle, in traditional Conservatism it is a minor consideration, whilst the New Right holds views that are against this belief. You should also be aware that ONC includes striking a pragmatic balance between business and the needs of the people, the idea of the government taking noblesse oblige and the idea of making decisions to keep the 'ship' afloat as opposed to directing it. Perhaps most obviously, one nation principles are at the centre of one nation conservatism. The idea of Britain being viewed as a nation is of great importance to one-nation thinkers and this is why they are committed to reforms that make people feel part of the nation. This brings in ideas of social responsibility and the belief that social reform is essential in order to preserve a fragile society; in terms of strengthening existing bonds, reducing resentment and making people feel part of the nation. ...read more.

In contrast to one-nation principles of social reform and a need for Britain to be defined as a nation, traditional Conservatives interpret the organic nature of society to mean that dramatic reforms will lead to an unstable society. This faction of the ideology holds the view that any reforms should be to maintain existing structures of historic institutions and not to better the lives of the people; the government has no role in social reform. Whilst one-nation principles vindicate social reform in order to maintain stability and order, traditional conservatives see the maintenance of hierarchy and ensuring that everyone knows their place as being important for stability. The idea that a fragile and organic society must be governed by the ruling classes and that normal people must know their place is put forward by Burke in his best known work, 'Reflections on the Revolution in France', in which he likens the state to a parent and subjects to its children. Here, he illustrates his belief that people have an obligation to obey the state as long as it provides them with order. ...read more.

Response to Question
This question requires candidates to consider the evidence that conservatives have supported One Nation principles (such as the British Conservative Party from Disraeli's ministry to the beginning of Thatcher's leadership), and, importantly, to use the evidence of ...

Response to Question
This question requires candidates to consider the evidence that conservatives have supported One Nation principles (such as the British Conservative Party from Disraeli's ministry to the beginning of Thatcher's leadership), and, importantly, to use the evidence of conservatives opposing One Nation ideas as an argument against the idea that conservatives have supported One Nation principles. With a "To what extent..." question, candidates should make a judgement at the end based on the two sides of the debate that they have weighed up, and this candidate is an excellent example of an effective concluding paragraph.

Level of Analysis
The level of analysis in this essay is excellent. The frequent references to and use of quotations by politicians and political thinkers (Disraeli, Burke, Oakeshott, Joseph) demonstrates a strong candidate and is an important skill in order to gain a good grade in A Level Politics, as it shows the examiner the candidate has a good knowledge of the topic, and that they can apply their knowledge to new situations under timed conditions. The inclusion of the two other major branches of conservatism (traditional and New Right) in order to evaluate whether the ideology has been influenced as a whole by One Nation ideas is a good technique, and is a key aspect of this essay, as it provides the counterargument to the assumption put forward in the question. The candidate has also acknowledged the tensions between some of the core ideas of conservatism and the desire for social reform as advocated by One Nation principles shows an example of this, as they contrast traditional and One Nation conservatism.

Quality of Writing
Overall the candidate's quality of written communication is very good, and their writing style is fluent and reads well. There are no spelling mistakes, but political ideologies are not proper nouns and thus should not be capitalised (i.e. "conservatism" and not "Conservatism", and "conservatives" should only be capitalised when referring to the Conservative Party). This is a very minor error, but it at A Level candidates should have an excellent grasp of spelling and grammar, particularly with regards to subject-specific vocabulary.