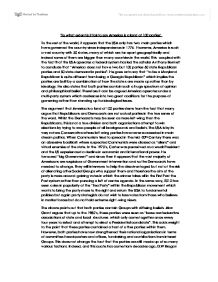 To what extent is it fair to say America is a land of 100 parties?

'To what extent is it fair to say America is a land of 100 parties' To the rest of the world, it appears that the USA only has two main parties which have governed the country since independence in 1776. However, America is such a vast country with 50 states, many of which are far apart geographically and indeed some of them are bigger than many countries in the world. This coupled with the fact that the USA operates a federal system has led the scholar Anthony Bennett to conclude that "America does not have two but 100 parties-50 state Republican parties and 50 state democratic parties". He goes onto say that "to be a Maryland Republican is quite different from being a Georgia Republican" which implies the parties are built by a combination of how the states are made up rather than by ideology. He also states that both parties contain such a huge spectrum of opinion and philosophical belief. Therefore it can be argued America operates under a multi-party system which coalesces into two great coalitions for the purpose of governing rather than standing up for ideological issues. The argument that America is a land of 100 parties stems from the fact that many argue that Republicans and Democrats are not actual parties in the true sense of the word. ...read more.

This does not change the fact that the parties are still made up of so many various factions. Indeed, and this quote has come from decades ago, D.W Brogan said that the two major parties "were like two bottles with different labels-both empty". More recently in 1997 political commentator Mark Shields said "as of today America has two Republican parties separated by the issue of abortion". Bennett shows how a moderate Republican and a liberal Democrat exhibited the same voting patterns as despite being from different parties they both represented white, highly educated middle-class voters. The fact is that the USA has only two major parties despite such a huge and diverse population. Therefore, given this range of backgrounds and beliefs, why have other smaller or minority parties risen to take part in Government? There have been some minor successes but again the face of US Politics does not seem to change. The most successful third party candidate has been Ross Perot who won 19.6% of the vote in 1992 and 10.1% in 1996. However, other parties have returned paltry results but the Green Party candidate Ralph Nader, whilst only winning 3.7% of the vote, may have cost Al Gore the election by taking votes from the latter. ...read more.

This stems from the fact that for a party to govern in both houses the need to attract different voter sets. For example, Presidential Democrats want to win the national election and to do so would concentrate on winning and wooing support in the urban areas of large industrialised states. However Congressmen are concerned with the narrow interests of the locality they represent and therefore concentrate on rural and urban influences. From this side of the Atlantic we see a two party system that culminates in the excitement of the Presidential election. However, if we delve deeper into the process, we can see that this could in fact be a four party system as the parties need to concentrate on electing a President but also winning Congress. There are also many disparate voters and members within both parties and each of the 50 states also have its own local politics and elections. Therefore, I would conclude that the USA may have 100 parties that come together as two but they are not political parties as we define them and in the end the White House is contested between Republican & Democrat. There should be many more minor parties that could set up and challenge but the processes in place makes this extremely difficult to achieve. There is a potential for America to be the land of many parties but from the outside we see only two. ...read more.