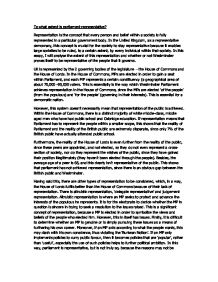 To what extent is Parliament representative?

To what extent is parliament representative? Representation is the concept that every person and belief within a society is fully represented in a particular government body. In the United Kingdom, as a representative democracy, this concept is crucial for the society to stay representative because it enables large societies to be ruled, to a certain extent, by every individual within that society. In this essay, I will analyse the extent of this representation and whether or not Westminster proves itself to be representative of the people that it governs. UK is represented by the 2 governing bodies of the legislature - the House of Commons and the House of Lords. In the House of Commons, MPs are elected in order to gain a seat within Parliament, and each MP represents a certain constituency (a geographical area of about 70,000 -90,000 voters. This is essentially is the way which Westminster Parliament achieves representation in the House of Commons, since the MPs are elected 'of the people' (from the populous) and 'for the people' (governing in their interests). This is essential for a democratic nation. However, this system doesn't necessarily mean that representation of the public is achieved. ...read more.

If Britain conforms to this sort of representation, it is clear that Westminster isn't very representative, because most MPs only keep to the wishes of the electorate to a certain extent, which goes as far as listening to their question and problems. Therefore, Westminster can be said to neither be representative of the people or of their views. The Burkean Notion is a concept (derived from the Whig MP Edmund Burke) that states that MPs should act only in accordance with their own conscience in matters of policy. If they don't, they should resign, since it would be going against their conscience to accept Collective Ministerial Responsibility if they are taking responsibility for a decision that they do not feel comfortable with. There were several examples of this during the Iraq War in 2003, where a few MPs like Robin Cook resigned as a protest against Blair's stance on the war. This notion is most closely linked to 'judgment representation', another theory of Burke's, which is antithetical to the other two theories. As he said in 1724, 'your representative owes you, not his industry only, but his judgment and he betrays, instead of serving you, if he sacrifices it to your opinion'. ...read more.

However,this only addresses the issue of whether representation is necessary, not whether it is actually applied in Westminster, and so does not fully justify the deficient representation in Parliament. In conclusion, though government tries to implement measures of representation, these are only fulfilled to a very small extent, since the views and beliefs of the public are very rarely brought out in Parliament. Representation is only achieved to a small extent for 2 reasons; firstly, it is impossible, especially with the peers, to have a Parliament that fully represents the people demographically. Secondly, the different concepts of representation mentioned above, conflict with eachother; an MP/peer can follow the people's beliefs to the utmost, or follow their own judgment/conscience (Burkean Notion). As long as there are these conflicting ideas of representation within the concept itself,it is impossible to fulfil completely. Our current Coalition government can be said to either be the 'best of both worlds' or 'a compromise'; it can be considered the former because the merging of the Tory and LibDems parties shows that the majority of electorate opinion is being represented in Parliament. Even so, the situation can be analysed as the latter because a Coalition is a not a desired result - a Tory voter wouldn't want LibDem influence in government, and vice versa. Therefore, Parliament is only representative to a very small extent. ...read more.