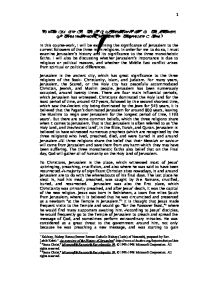 To what extent is the city of Jerusalem vital to the followers of three main world religions in the present time?

To what extent is the city of Jerusalem vital to the followers of three main world religions in the present time? In this course-work, I will be examining the significance of Jerusalem to the current followers of the three main religions. In order for me to do so, I must examine Jerusalem's history and its significance to the three monotheistic faiths. I will also be discussing whether Jerusalem's importance is due to religious or political reasons, and whether the Middle East conflict arises from spiritual or political differences. Jerusalem is the ancient city, which has great significance to the three religions of the Book- Christianity, Islam, and Judaism. For many years, Jerusalem, the Scared, or the Holy city has peacefully accommodated Christian, Jewish, and Muslim people. Jerusalem has been numerously occupied, around twenty times. There are four main influential periods, which Jerusalem has witnessed. Christians dominated the Holy land for the least period of time, around 427 years, followed by the second shortest time, which saw the Ancient city being dominated by the Jews for 543 years, it is believed that the Pagan's dominated Jerusalem for around 800 years, leaving the Muslims to reign over Jerusalem for the longest period of time, 1193 years1. But there are some common beliefs, which the three religions share when it comes to Jerusalem. That is that Jerusalem is often referred to as 'the Holy land, and the Ancient land', in the Bible, Torah, and Quran. Jerusalem is believed to have witnessed numerous prophets (which are recognised by the three religions) who lived, preached, died, and were buried in and around Jerusalem. All three religions share the belief that their Messiah or saviour will come from Jerusalem and save them from any harm which they may have been suffering. The three monotheistic faiths also belief that on the Final day, God will gather all of humanity on the Holy land of Jerusalem. ...read more.

Clinton was still willing to make offers towards the two sides, particularly before he left office. Another one of Clinton's suggestions was to allow the Palestinians to control everything above ground level, while the Israelis would govern everything below. Throughout the talks, Barak stated that he was open minded, when the talks failed; it was obvious that because Barak was willing to think about proposals, and Arafat didn't commit to anything, that he was to blame for the talks' failure. Both governments are constantly trying to win international support; each leader would travel, meet Presidents, Prime Ministers, and Kings to convince them that Jerusalem is meant for them and not the opposition. Arafat travels to Arab countries, requesting their support, while the Israeli Prime Minister would travel to America and Europe. Numerous 'Arab summits' have been held in Egypt, and the United Arab Emirates to try resolving and gaining support, but no one is supporting either government whole-heartedly. Everyone wants to appear as righteous in order not to upset America, or their nation, which typically demonstrates politics at work, rather than religion. As I have previously noted, the Jews believe that Masjidal Aqsa and the Dome of the Rock are built on the remains of their Temples. In Lambert Dolphin and Michael Kollen's paper, 19 they note that if Tuvia Sagiv's theory is correct, then the Temple Mount was not constructed on the Dome of the Rock and Masjidal Aqsa, but rather, more South of the Islamic shrines, and precisely beneath the tress between the Dome of the Rock and Masjidal Aqsa. This theory cannot be a hundred percent correct due to the Jews unable to officially excavate where they think they'll find their temples, because the Islamic Waqf has complete control over the Islamic shrines. They note numerous arguments in favour of this theory, one of their arguments is that King Herod's palace (Jaffa Gate) ...read more.