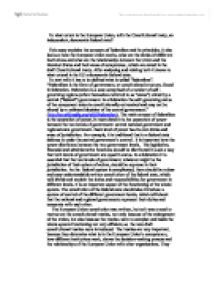 To what extent is the European Union, with the Constitutional treaty, an independent, democratic federal state?

To what extent is the European Union, with the Constitutional treaty, an independent, democratic federal state? This essay explains the concepts of federalism and its principles. It also looks at how the European Union works, what are the duties of different institutions and what are the relationships between the Union and the Member States and their areas of competence, which are stated in the draft Constitutional treaty. After analysing and relating both it shows to what extend is the EU a democratic federal state. To start with it has to be defined what is called "federalism". "Federalism is the form of government, or constitutional structure, found in federation. Federation is a state comprised of a number of self-governing regions (often themselves referred to as "states") united by a central ("federal") government. In a federation the self-governing status of the component states is constitutionally entrenched and may not be altered by a unilateral decision of the central government." (http://en.wikipedia.org/wiki/Federation). The main concept of federalism is the separation of power, in more detail it is the separation of power between the two levels of government: central national government and regional state government. Each level of power has its own duties and areas of jurisdiction. For example, it is traditional that in a federal state defence is under the central government's control. It is important how the power distributes between the two government levels. ...read more.

The areas of shared interest are : "internal market; area of freedom, security and justice; agriculture and fisheries, excluding the conservation of marine biological resources; transport and trance- European networks; energy ;social policy; economic, social and territorial cohesion; environment; consumer protection; common safety concerns in public health matters ". (Article 13, Title II, Part 1, Draft Treaty establishing a Constitution for Europe). Areas of supporting, coordination or complementary action are: "industry; protection and improvement of human health; education, vocational training, youth and sport; culture; tourism; civil protection" (Article 16, Title II, Part 1, Draft Treaty establishing a Constitution for Europe). The duties of The European Parliament, The European Council, The council of Ministers, The European Commission, The Court of Justice and other institutions and bodies of the European Union are stated in the Constitutional treaty. The European Parliament in association with The Council of Ministers exercise legislative and budgetary functions. The Members of the Council of Ministers are the specialized ministers of the Member States. The Council of Ministers also has a function of political control and consultation. The European Council is composed of the Heads of State or Government of the Member States and the President of the European Commission. It shall define the Union's main political directions, priorities and way of development. The Council of Ministers in association with The European Parliament have legislative function. ...read more.