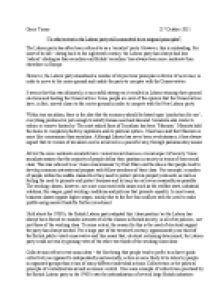 To what extent is the Labour party still committed to its original principles?

﻿Grace Turner 21st October 2011 ?To what extent is the Labour party still committed to its original principles?? The Labour party has often been referred to as a ?socialist? party. However, this is misleading. For most of its life ? dating back to the eighteenth century, the Labour party has always had less ?radical? ideologies than socialism and British ?socialism? has always been more moderate than elsewhere in Europe. However, the Labour party abandoned a number of its previous principles in favour of new ones, in order to move to the centre ground and enable the party to compete with the Conservatives. It seems that this was ultimately, a successful strategy as it resulted in Labour winning three general elections and beating the Conservatives. Some people are now of the opinion that the Conservatives have, in fact, moved closer to the centre-ground in order to compete with the New Labour party. Within true socialism, there is the idea that the economy should be based upon ?production for use?; everything produced is just enough to satisfy human need and demand. ...read more.

In most cases, business classes oppose higher wages, mainly due to the fact this conflicts with the need to make profits and generate funds for further investment. Until about the 1930?s, the British Labour party adopted this ?class position? as the Labour has always been forced to consider interests of all the classes in British society, in all of its policies, not just those of the working class. To some extent, the reason for this is the need of electoral support the party has always needed. For a large part of the twentieth century, approximately one third of the British public voted conservative and this meant that, electoral reckoning determined, the Labour party could not win by gaining votes of the other two thirds of the working class alone. Collectivism refers to two main ideas ? the first being that people tend to prefer to achieve goals collectively as opposed to independently and secondly, action is more likely to be taken by people in organised groups than a sum of many different individual actions. ...read more.

An emphasis on low inflation, for example, demonstrated the wider role. Since 1997, the Bank of England has started setting interest rates; cuts in income tax and have started to refuse to return to the more ?sharply progressive? income tax rates of the 1970?s; cuts in some benefits and eagerness to push forward with market reforms of the welfare state. ?New? Labour can also be distinguished from ?old? Labour in terms of a weaker association with the trade union movement and a reduced reliability on working class votes. During its early years, New Labour was a party very much dedicated to reforming and modernising, but it was not a fundamental one. It did not make any significant changes to the policies put forward but the Conservatives, however, it did seek to improve the way in which policy was executed and it has also attempted to make government action more susceptible to the needs of the disadvantaged and minorities in society. Its principle reforms, therefore, have been to the public services and to the welfare state. Over time, the party seems to have turned rapidly to consolidation rather than reform. New Labour tends to focus now on improving the delivery of the policies it has already implemented. ...read more.