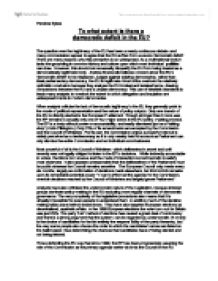 To what extent is there a democratic deficit in the EU?

To what extent is there a democratic deficit in the EU? The question over the legitimacy of the EU has been a nearly continuous debate and many commentators appear to agree that the EU suffers from a severe 'democratic deficit'. There are many reasons why this perception is so widespread. As a multinational body it lacks the grounding in common history and culture upon which most individual polities can draw. However, this should not necessarily disqualify the EU from being treated as a democratically legitimate body. Andrew Moravcsik believes concern about the EU's 'democratic deficit' to be misplaced. Judged against existing democracies, rather than ideal parliamentary democracy, the EU is legitimate. Most critics overlook the relatively optimistic conclusion because they analyse the EU in ideal and isolated terms, drawing comparisons between the EU and a utopian democracy. This use of idealistic standards is leads many analysts to overlook the extent to which delegation and insulation are widespread trends in modern democracies. When analysts criticise the lack of democratic legitimacy in the EU they generally point to the mode of political representation and the nature of policy outputs. Only one branch of the EU is directly elected is the European Parliament. Though stronger than it once was, the EP remains is actually only one of four major actors in the EU policy-making process. ...read more.

It is now the EP that, late in the legislative process, accepts rejects or amends legislation in a manner more difficult for the Council to reject than to accept. In the Council of Ministers, which imposes the most important constraint on everyday EU legislation, permanent representatives and ministers act under constant instruction from national executives, just as they would at home, although admittedly they are compromising with their counterparts from other countries. Here the bonds of accountability are tight: these representatives can be re-instructed or recalled at will and this is an important channel of democracy, which maintains the intergovernmental structure of the EU. And, interestingly, the European Central Bank is more independent of political pressure than any known national example. The EU's appearance of exceptional insulation is due to the subset of functions it performs which are matters of low electoral salience and there is no need to divulge these matters to a public who would not understand nor be interested in them. There is a symbiotic relationship between national and EU policy-making- a division of labour in which commonly delegated functions tend to be carried out by the EU, while functions that inspire popular participation remain largely national. This gives the impression that the EU is undemocratic, whereas it is simply specialising in those functions of democratic governance that tend to involve less direct political participation. ...read more.

It is true that certain aspects of the system, such as early discussion of COREPER, tend to take place in relative secret, but the same could be said of the preparation of legislation in national systems, for example the increasing amount of private Cabinet meetings under Blair. Given the vehemence of the critique levelled against it, one might assume that the EU lacks any form of democratic participation and accountability at all. Siedentop believes that this is the stuff of British tabloids, fuelled by ignorance of what the EU actually does. However, it does underlie much legitimate concern, particularly those amongst the libertarian right of the political spectrum. There is no elected head of state to give democratically controlled direction to the EU and concerns gain plausibility from the open role played by non-elected officials in Brussels, and the geographical and cultural distance between those regulators and the average European 'person in the street'. The recent enlargement has at least altered the democratic legitimacy in a positive way. Each country has only one commissioner now and it is further on its way towards a constitution and a fairer weighted vote. The EU employs direct accountability via the EP and indirect accountability via elected national officials. When judged by the practices of existing nation-states and in the context of a multi-level system, the EU does not suffer from a fundamental democratic deficit to anymore of an extent that any national government. Pandora Sykes ...read more.