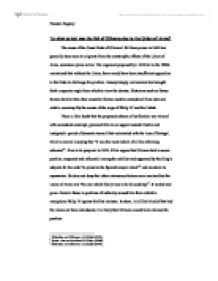 To what extent was the fall of Olivares due to the Union of Arms?The cause of the Count Duke of Olivares' fall from power in 1643 has generally been seen to originate from the catastrophic effects of the Union

To what extent was the fall of Olivares due to the Union of Arms? The cause of the Count Duke of Olivares' fall from power in 1643 has generally been seen to originate from the catastrophic effects of the Union of Arms, seventeen years earlier. The argument proposed by J.H Elliot in the 1960s maintained that without the Union, there would have been insufficient opposition to the Duke to challenge his position. Unsurprisingly, revisionism has brought forth a separate angle from which to view the demise. Historians such as Henry Kamen believe that other causative factors must be considered if one does not wish to oversimplify the events of the reign of Philip IV and his Valido. There is little doubt that the proposed scheme of unification was viewed with unmasked contempt, garnered little to no support outside Castile and instigated a period of domestic turmoil that culminated with the loss of Portugal. Elliot is correct in saying that "it was the most radical of all his reforming schemes"1. Prior to its proposal in 1625, Elliot argues that Olivares held a secure position, respected and influential among the nobility and supported by the King's subjects for his wish "to preserve the Spanish empire intact"2 and maintain its reputacion. He does not deny that other extraneous factors were involved but the Union of Arms was "the one which finally was to be his undoing"3. It incited and gave a basis to those in positions of authority around him from which to manipulate Philip IV against his first minister. In short, it is Elliot's belief that had the Union not been introduced, it is likely that Olivares would have retained his position. When he rose to power in 1622, a number of deeply unfavourable long-term trends were working against Spain. Financially, the war-hungry government of Philip II had created a need to anticipate resources for several years to come and, unlike Lerma; Olivares did not have the luxury of operating "on borrowed time"4. ...read more.

"In effect", states Elliot, "[Olivares] was advocating that Castile should export its inflation"20 and this was unsurprisingly met with further enmity. Elliot also claims that this illustrates how the Union of Arms led to problems not just for higher authorities but also for almost every individual. Olivares' reputation penetrated through all levels of the populace and caused different sectors of society to gradually withdraw their support. Disobedience to the Valido, at this time, was neither unusual nor condemned. Elliot also argues that the Count of Castrillo was the person most interested in removing Olivares; "Castrillo assiduously cultivated the Queen, laying foundations of a power-base of his own....by undermining any lingering support for Olivares"21. The Union of Arms was the perfect opportunity for Castrillo to establish himself with little threat from Olivares and his deteriorating reputation. Olivares' judgements "revealed little awareness of the likely reactions to his project"22. So much so that the Imperial Ambassador warned the King that the Union of Arms had caused such discontentment that the monarchy would be ruined unless he modified his government. Elliot concludes with crediting the Queen as playing a prominent role in the Count Duke's demise. She was able to use unpopularity created by the Union to manipulate her husband into relieving him. Since the fate of all ministers was dependent on the King's opinion of them, it was equally essential to have the support of the Queen, especially once she had grown in self-confidence and authority through experience of government. More recent research has, however, approached Elliot's belief that the Union is singularly to blame, with caution. Revisionists such as Kamen agree with Elliot's view but believe it to be overly simplistic. It was perhaps not the concept of the Union that caused such discontent, but the forceful way it was executed; it would have been wiser to "give the programme a solid support basis."23 Had the Union been properly explained and discussed, with more contributions from all the various provinces, it may have had a ...read more.

It is, however, just as plausible that Kamen and Darby's arguments are valid; had foreign policy and other factors been effectively dealt with, the Union would have had a greater chance of acceptance. This is why Kamen disputes that the Union of Arms bears sole responsibility for Olivares' fall. It should be noted, in Elliot's defence and to Kamen's credit, that more recent research analyses Union in a far broader context. At the time when Elliot was writing, he had fewer available resources from which to make his deductions. Kamen and the revisionists look beyond and prior to the reign of Philip IV, at Spain's position on European and imperial fronts as well as its social, economic and financial circumstances. Clearly this offers the historian a far greater idea of the Union in a contextual sense and Kamen consequently argues that there was a crisis at the international as well as national level. He believes the response helped to bring "regionalism to birth"38 and this is what contributed to Olivares' downfall and then escalated to the disintegration of his government. Elliot's research focuses more on the events that happened solely during Olivares' time in power, rather than within the larger context, which is why his argument is now viewed with less confidence; "people must be warned off by every possible means from considering the action of any one cause....without taking account of the others whose effects are commingled with it."39 Kamen's research, which incorporates factors indirectly related to the Union of Arms and from a wider variety of causative factors and distils "so much of the experience of the past as is accessible to him, that part which he recognises as amenable to rational explanation and interpretation, and from it draws conclusions, which may serve as a guide to action"40 Elliot appears to have overlooked the less obvious aspects surrounding the Union of Arms and in doing so, placed undue importance on its role in the fall of the Count Duke of Olivares. ...read more.