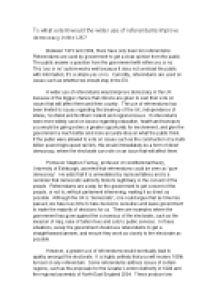 To what extent would the wider use of referendums improve democracy in the UK?

﻿To what extent would the wider use of referendums improve democracy in the UK? Between 1973 and 2004, there have only been ten referendums. Referendums are used by government to get a clear opinion from the public. The public answer a question from the government with either yes or no. This ?yes or no? system works well because it does not overload the public with information; it?s a simple yes or no. Currently, referendums are used on issues such as whether we should stay in the EU. A wider use of referendums would improve democracy in the UK because of the bigger chance that citizens are given to cast their vote on issues that will affect them and their country. The use of referendums has been limited to issues regarding the break-up of the UK, independence of Wales, Scotland and Northern Ireland and regional issues. If referendums were more widely used on issues regarding education, health and transport, you would be giving voters a greater opportunity for involvement, and give the government a much better and more accurate idea on what the public think. ...read more.

In these situations, surely the government should use referendums to get a straightforward answer, and ensure they work as closely to the electorate as possible. However, a greater use of referendums would eventually lead to apathy amongst the electorate. It is highly unlikely that you will receive 100% turnout on any referendum. Some referendums address issues of certain regions, such as the proposals for the Greater London Authority in 1998 and the regional assembly of North East England 2004. These produce low turnouts because they predominantly affect a minority of people and not the country as a whole. Low turnouts could go against the principles of democracy, as it is not reflecting the opinion of 100% of the electorate and lacks legitimacy. Turnout is falling in general elections alone and if there were more referendums the public would have a worse attitude towards voting. David Butler of Nuffield College, Oxford University raised the point that referendums can be used as a tactical device by the current government, when they are too worried about judgement on their own decisions or when they are confident that they will win it. ...read more.

To conclude, I feel that Referendums are currently used on the wrong issues, and are used by the current government to avoid giving opinions on things they?d rather keep quiet about, like the troubles in Northern Ireland and Devolution to Scotland, Wales and Northern Ireland. I think that they should only be used when there is a significant clash (large protests and excessive public concern) on Governmental decisions. The government could be forced to take a certain amount of referendums every five years, but this would probably just encourage them to use them at times that suit them and on unnecessary issues. I believe that there should not be a larger quantity of referendums, but they should cover a broader area of government. Perhaps referendums could be implemented when an e-petition has reached 5,000,000 signatures. This would be a good system because it would show a high desire for the referendum and that the turnout is likely to be high. In theory it may be down to the government to decide which issues are to be given a referendum, but in practice, this may not be the case. ...read more.