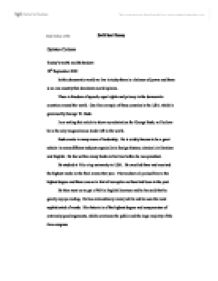 Today's world and its leaders.

Satirical Essay Opinion Column Today's world and its leaders 19th September 2002 In this democratic world we live in today there is a balance of power and there is no one country that dominates world opinion. There is freedom of speech, equal rights and privacy in the democratic countries around the world. One fine example of these counties is the USA, which is governed by George W. Bush. I am writing this article to show my admiration for George Bush, as I believe he is the only magnanimous leader left in the world. Bush excels in many areas of leadership. He is widely known to be a great scholar in many different subjects especially in foreign history, classical civilisations and English. He has written many books in his time before he was president. He studied at Yale a top university in USA. He excelled there and received the highest marks in the final exams that year. The teachers all praised him to the highest degree and there was not a hint of corruption as there had been in the past. ...read more.

Whenever the US has asked for support in international policies Britain has always been the first to state that they do not support the US opinion and Blair's foreign policy is virtually always the opposite of the US's. Recently there has between a major dispute as to what to do with the situation in Iraq and their president Saddam Hussein between USA and the rest of the world. A little background information about the US's history with Saddam Hussein is needed to fully understand the situation. When Saddam Hussein took over from Ahmed Hassan Al Bakr the US refused to sell him any weapons at all and they never have. When Ayatollah Khomeini was bringing about revolution in Iran the US again refused to help Saddam Hussein, as they believed he was an evil dictator. The US's relations with Iraq had always been very bad until recently when Bush took over the US presidency. He says that he disagrees with his predecessors' views about Iraq and the military action that took place in 1990. ...read more.

Bush is pressing for UN support and the re-entry of weapons inspectors into Iraq while the rest of the permanent members of the UN Security Council are doing the opposite. In my 13 years as a journalist I have never seen such recklessness from the four other permanent members. Fortunately we still have one sane leader in this leader in this world: George Bush. I truly wish that everyone could look up to Bush and try to be more like him. I have sent a letter to Tony Blair many times asking him to listen to Bush. At least Bush's administration is not full of warmongering hawks unlike Mr Blair's cabinet. The USA's view on Iraq is completely correct, as it seems to be the only one, which is not corrupt and does not use military force without first trying democratic channels. Therefore I ask that as many of you, who are physically able, to join in the pro-Bush demonstration and to air their views about the situation in Iraq. By Rafi Allos Chief Political Correspondent ...read more.