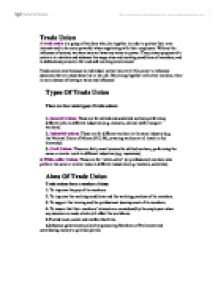 Trade Union A trade union is a group of workers who join together in order to protect their own interests and to be more powerful when negotiating with their employers. Without the influence of unions, workers may not have any voice or power. The primary purpose of a union is to maintain and advance the wage rates and working conditions of members, and to defend and promote a fair and safe working environment Trade unions exist because an individual worker has very little power to influence decisions that are made about his or her job. By joining together with other workers, there is more chance of having a voice and influence Types Of Trade Union There are four main types of trade unions: 1. General Unions. These are for skilled and unskilled workers performing different jobs in different industries (e.g. cleaners, clerical staff, transport workers). 2. Industrial unions. These are for different workers in the same industry (e.g. the National Union of Miners (N.U.M), covering workers at all levels in the hierarchy). 3. Craft Unions. These are fairly small unions for skilled workers, performing the same or similar work in different industries (e.g. musicians). 4. White-collar Unions. These are for 'white-collar' (or professional) workers who perform the same or similar tasks in different industries (e.g. ...read more.

If an employee feels they are being unfairly treated, he or she can ask the union representative to help sort out the difficulty with the manager or employer. If the problem cannot be resolved amicably, the matter may go to an industrial tribunal. Industrial tribunals make sure that employment laws are properly adhered to by employees and employers. They are made up of people outside the workplace who listen to the employer's and the employee's point of view and then make a judgement about the case. People can ask their union to represent them at industrial tribunals. Most cases that go to industrial tribunals are about pay, unfair dismissal, redundancy or discrimination at work. Unions also offer their members legal representation. Normally this is to help people get financial compensation for work-related injuries or to assist people who have to take their employer to court. Information and advice Unions have a wealth of information which is useful to people at work. They can advise on a range of issues like how much holiday you are entitled to each year, how much pay you will get if you go on maternity leave, and how you can obtain training at work. Member services During the last ten years, trade unions have increased the range of services they offer their members. ...read more.

arbitration in which the arbitrator will decide completely in favor of one party or the other, with no compromise or negotiation being allowed. It is likely, therefore, that both parties (the employers and the trade union) will make their demands more conservative and realistic than if the arbitrator was allowed to choose an outcome which was somewhere between the two. Why has trade union membership changed in recent years? There are several reasons for this fall in membership, including: * a dramatic fall in the number of jobs in manufacturing industries where union membership was traditionally high * larger numbers of unemployed people * a fall in traditional full time employment and an increase in part time and temporary workers who are less likely to join unions * an increase in the proportion of the workforce employed by small companies where it is often difficult for unions to organize Hostile legislation - the previous Conservative government introduced laws which make their members. Recent Legislation Recent legislation has severely weakened trade union power as follows: * An employer can now sue a union for lost profits if industrial action is taken without an initial secret ballot of workers. * Industrial action can be taken only against the original employer and not against his suppliers or buyers. * Mass picketing is unlawful. Only a handful of strikers are allowed to man a picket line, peacefully. ...read more.